The Christmas festivities are over and the thought of starting work is looming over us, is there any better excuse for a holiday in January? We’ve got the perfect ‘January Blues’ cure from lavish escapes in 5 star hotels in Abu Dhabi to nearby subtropical climates in Agadir. There’s no better way to kick start the year than a cocktail in hand on a beautiful beach.

It might be blowing a gail in the UK, but it’s one of the best months to check out the Caribbean or take advantage of the Canary Islands with temperatures rarely dipping below 20°C. With that in mind, let’s explore where’s hot in January.

Jump to a section below and find exactly what you're looking for
1. Lanzarote 2. Marsa Alam 3. Agadir 4. La Palma 5. Dominican Republic 6. Abu Dhabi 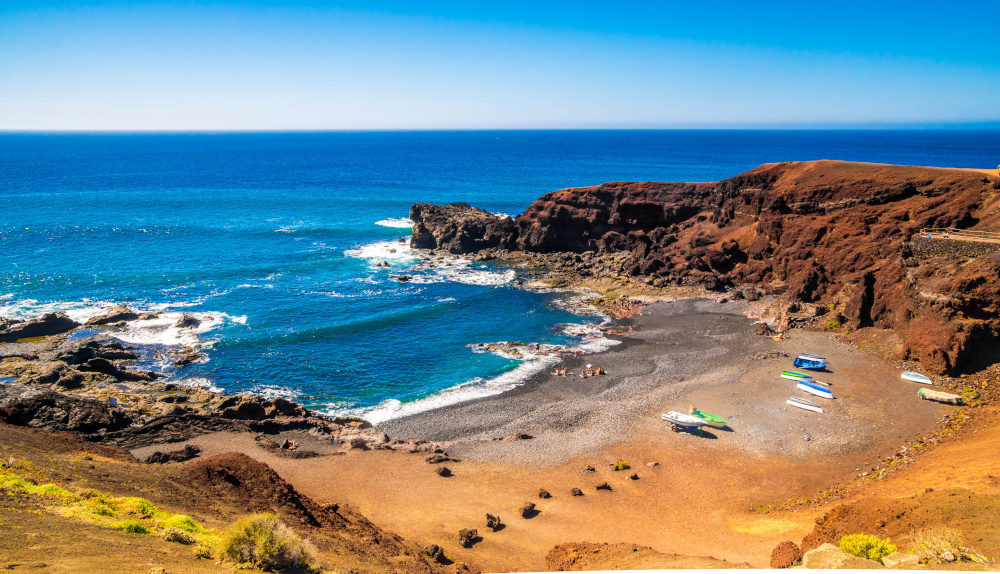 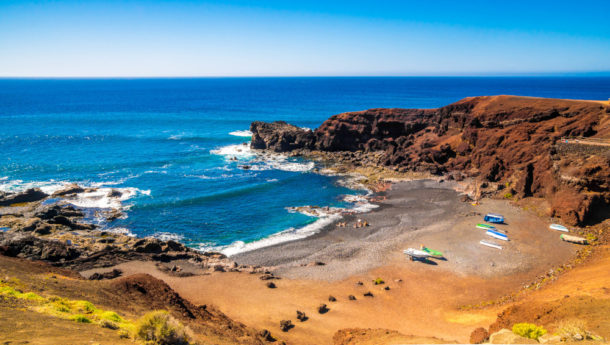 When in doubt on where you can get a tan, Lanzarote is always a good idea. Not only does the temperatures rise above 20°C during the day, but there’s over seven hours of sunshine to catch some rays. Its climate is classed as subtropical-desert due to its 125-kilometre close proximity to Africa. No wonder it’s nicknamed the ‘Island of Eternal Spring’. The highest temperature recorded in January is 27°C, so shorts are definitely required here.

Not only will you be introduced to some of the best beaches in the Canary Islands including Las Conchas, but Lanzarote is a UNESCO World Biosphere Reserve which means it’s teeming with unique landscapes such as the Fire Mountains and rock formations from its volcanic past that are worth protecting. It also has an impressive art scene with creative genius Cesar Manrique decorating the country with exhibits. As for resorts, Costa Teguise and Playa Blanca get top marks for stand-out attractions and Blue Flag sand spots.

Sun fact: Lanzarote is actually the warmest place in Europe during the winter season – there’s no better place for a short haul escape in January.

Sandos Papagayo Beach Resort: Whether you’re looking for a romantic retreat or a family-friendly escape, this 4 star establishment has it all. From its trio of swimming pools to its contemporary spacious rooms and gourmet dining options, you won’t be able to resist its 24-hour All Inclusive offerings. 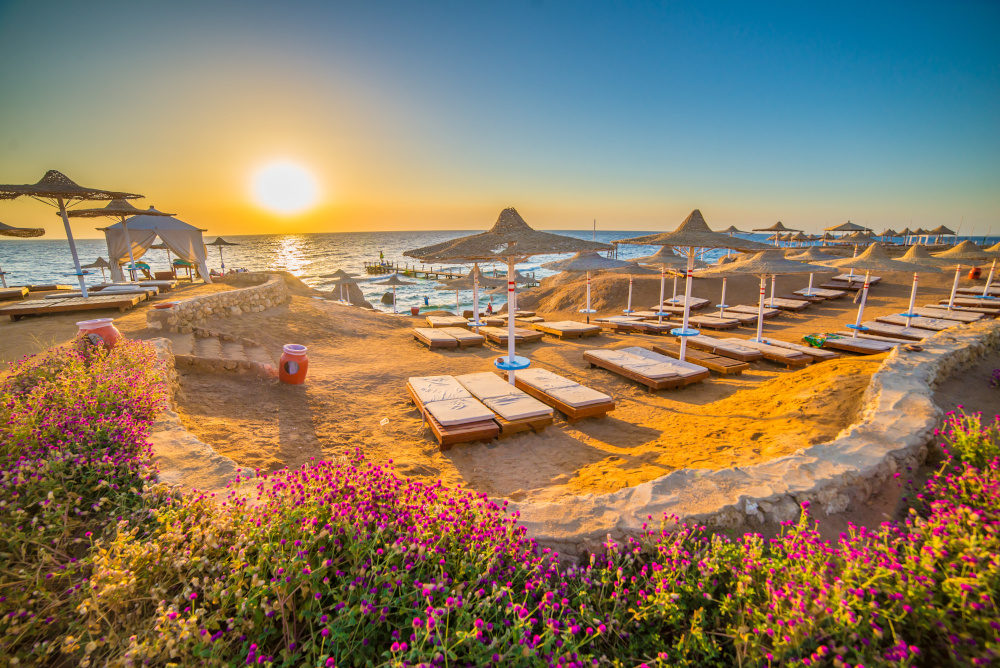 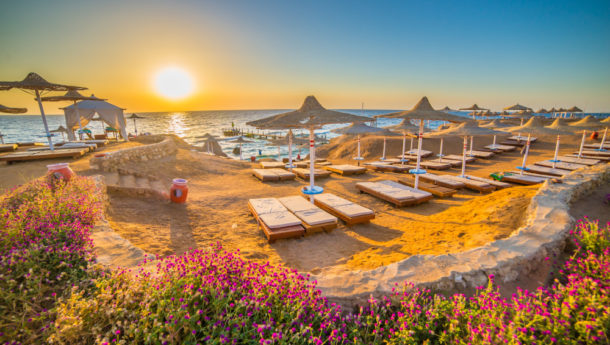 Perfectly positioned along the southeast coast of Egypt soaking up all the heat is Marsa Alam. Peaking at 25°C, you can almost hear the pool calling your name for a refreshing dip. Ditch the umbrellas and enjoy water of a different kind with the Red Sea at your fingertips boasting temperatures of 23°C. There’s 10 glorious hours of sunshine to revel in and when the sun finally begins to set the climate sits at a comfortable 17°C.

If you want Caribbean-like shores without the hefty flight time, Marsa Alam is a top choice with its footprint-free sands and ever-growing number of luxury hotels. It’s home to some of Egypt’s most unspoilt reefs and a 70-metre-high coral wall. But for those who prefer splashes in shallower depths, Aqua Coraya Waterpark has a slide count in the double digits.

Overflowing with swanky eateries and upmarket boutiques, this great value resort will certainly impress. Unique experiences are also on the cards with the Valley of the Camels and an emerald mine which once supplied Cleopatra’s jewels waiting to be discovered.

Sun fact: The chance of rain in January is 0mm, which means there’s no better time to visit for guaranteed warmth.

Best for: Beaches, snorkelling, diving and All Inclusives

Coral Hills Resort: Built with snorkelers and divers in mind, this premier spot along the Red Sea is at the foot of Egypt’s best reefs. When you’re not diving the depths of the ocean, the lagoon-size pool awaits. As for rooms, guests can lounge around in plush suites with not only a private bedroom but living area too.

Hotel Royal Tulip Beach Resort: With a deluxe 5 star rating, private beachfront and 45,000 metre square gardens to its name, luxury is a given. Onsite there’s a waterpark, kids’ club, spa and three restaurants. 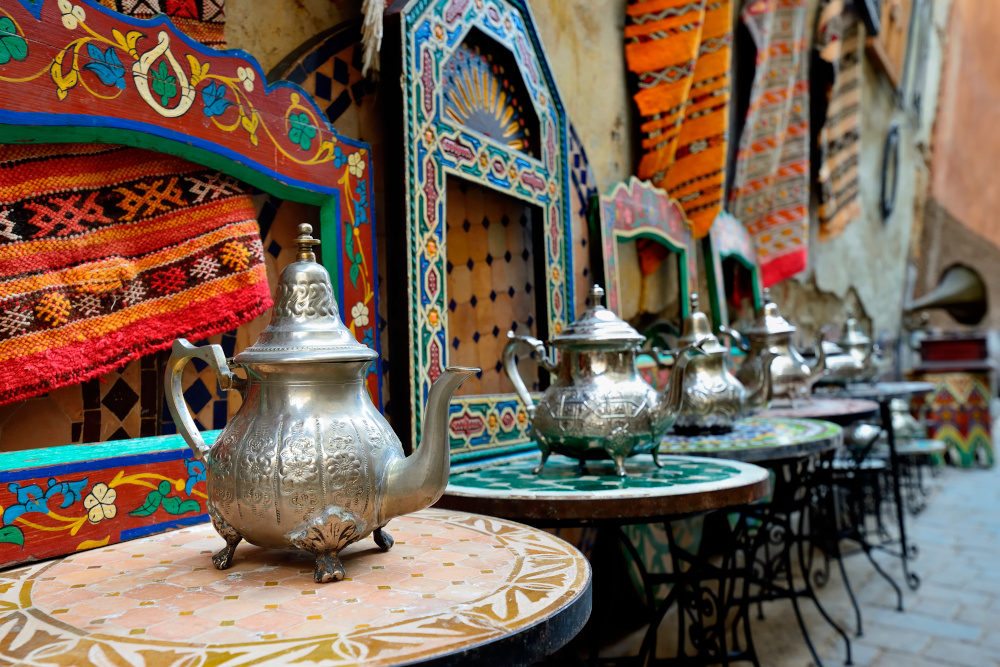 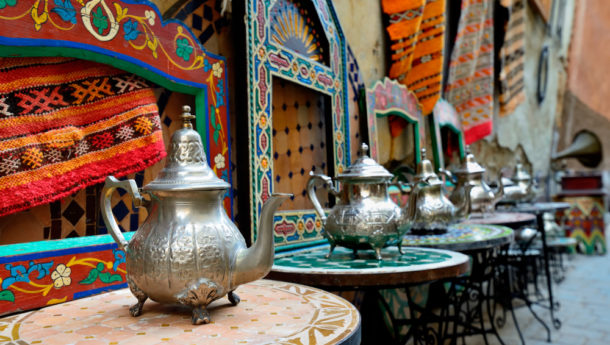 Considering January is the coldest month to visit, it doesn’t do too bad with highs of 23°C gracing its shores. Early mornings may present a chill, but by lunch time you’ll be cannonballing into the pool just to cool down. Only one inch of rain is predicted, so the wet weather won’t ruin your holiday either – what other excuse do you need?

Known as Morocco’s premier beach destination along the west coast, holidaymakers can bask in nine kilometres of coastline or spice-scented souks. The village of Taghazout is a renowned surfing spot and is within close proximity of bucket-list sights including the blue pools of Paradise Valley and waterfalls of Imouzzer.

After being destroyed by an earthquake in the sixties, Agadir was built with a new modern style featuring contemporary cafes and blossoming parkland. But don’t be fooled, its old-world city charm can still be found within its centre of colourful bazaars showcasing handmade rugs and alluring leather goods.

Sun fact: Each afternoon in January, most visitors include watching the sunset from one of the many cafes near the beach, or from the Kasbah on the hill overlooking the harbour on their must-do lists.

Amadil Beach Hotel: The ultimate beach break lies at this swanky hotel with its own private stretch of sand, delightful culinary experience and selection of swimming pools. Its biggest draw will have your tiny tots in their element with a waterpark housing five slides.

Hotel Labranda Les Dunes: This 4 star property contains all the first-class facilities you need for an unforgettable stay. From its unparalleled balcony views to its Olympic-size swimming pool and mile-long treatment lists in the spa – you’re in expert hands. 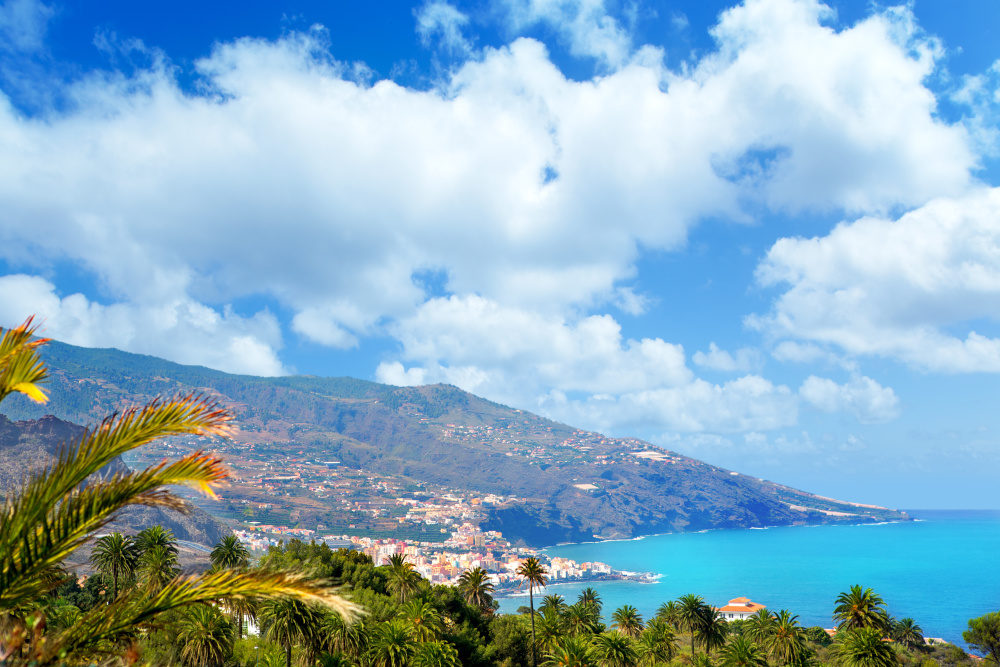 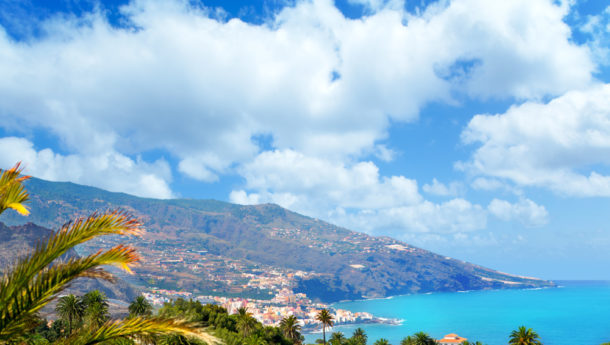 Just as popular in the winter season as it is in the summer, La Palma is a must-visit with average highs of 21°C throughout January. We recommend travelling throughout the middle or end of  the month to avoid slight rainfall. But overall, its sizzling climate won’t let you down. Humidity reaches 70% at this time of year, but the island’s gentle breeze will ensure it goes unnoticed. It’s one of the best destinations in Europe for a winter break and one of the warmest, what’s not to love?

Also known as the ‘Beautiful Island’ due to its epic landscape, imposing volcanoes and deep forests – you can’t escape its charms. Not only has it been declared a World Biosphere Reserve, but it’s also a Starlight Reserve due to its clear skies and strict light pollution laws. Romantic getaways are recommended here with a telescope in hand and a picnic on the mountain tops, there’s no better place for a proposal.

Hikers will also be in awe of its 1,000 trails which encounter tumbling waterfalls, deep gorges and private beaches. There’s also a majestic Old Town which still contains its colonial layout and maritime atmosphere.

H10 Taburiente Playa: As part of the reputable H10 brand, you can only expect the best of the best from this hotel. With a seafront location, recently renovated rooms and varied cuisine, it doesn’t get much better than this showstopper.

La Palma Romantica: Looking for a spacious hotel with unbeatable island views? Look no further, this idyllic spot not only places you amidst La Palma’s dreamy terrain but it has a spa with an indoor pool, free Wi-Fi, sports courts alongside a restaurant and bar. 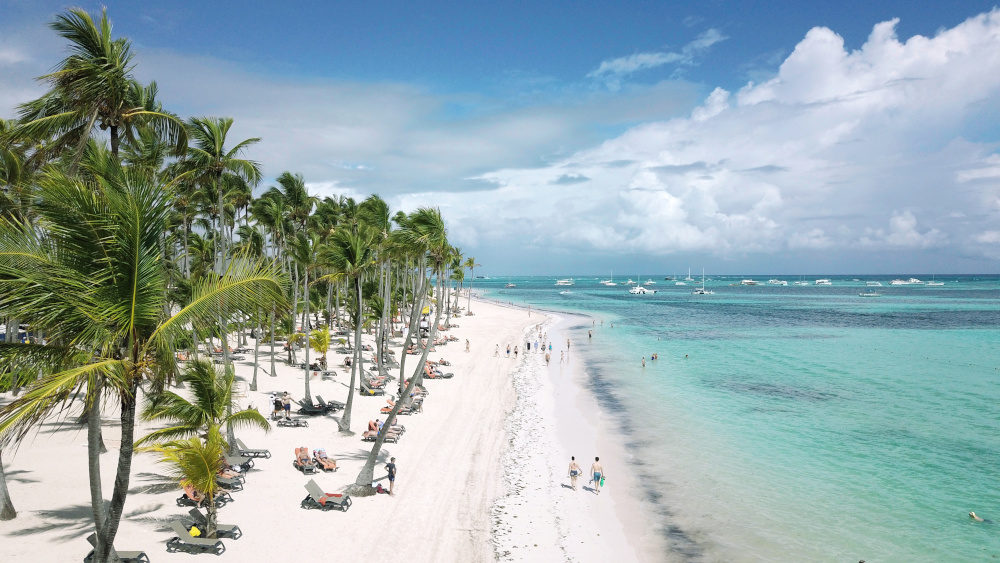 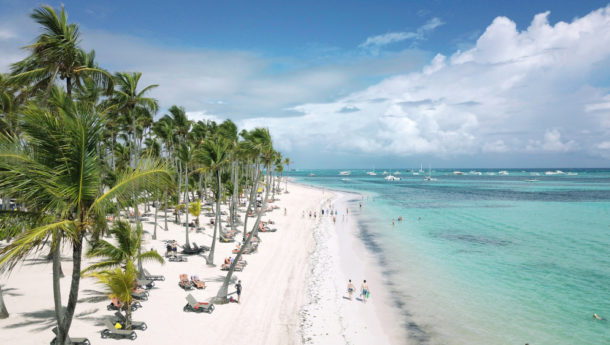 If tropical climates and highs of nearly 28°C are what you’re searching for, the Dominican Republic is your go-to. Not only is the heat intense during January, but there’s only a small chance of rain and even when it does make an appearance it’s in short spouts. Not to mention there’s only a two percent chance of winds and over six hours of sunshine a day.

As one of the most diverse countries in the Caribbean, the Dominican Republic suits all holidaymakers. For those who like to explore the island’s terrain, mangrove lagoons, cascading waterfalls and soaring summits are all at your fingertips. Meanwhile, culture vultures will be instantly captivated by its colonial village which has been declared a UNESCO World Heritage Site.

And don’t worry beach worshippers, we’ve not forgotten about you! With 800 miles of coastline tempting you with flawless sands and Blue Flag awards, all you need now is a cocktail in hand.

Sun fact: The resorts of San Juan and La Romana see less chance of rainfall during January than Punta Cana and Puerto Plata.

Punta Cana Princess: Want to make the most of the exotic weather without the kids? This adults only number is just for you. Housing 256 luxurious suites with 5 star ratings, alongside a state-of-the-art wellness centre and four swimming pools – glamorous stays are guaranteed.

Be Live Collection: Enjoying a private beach, a 24-hour All Inclusive programme and an onsite casino, this mega resort will keep boredom at bay. Bask in the taste of the Caribbean at its a la cartes, swim its nine pools and take your pick from 900 suites. 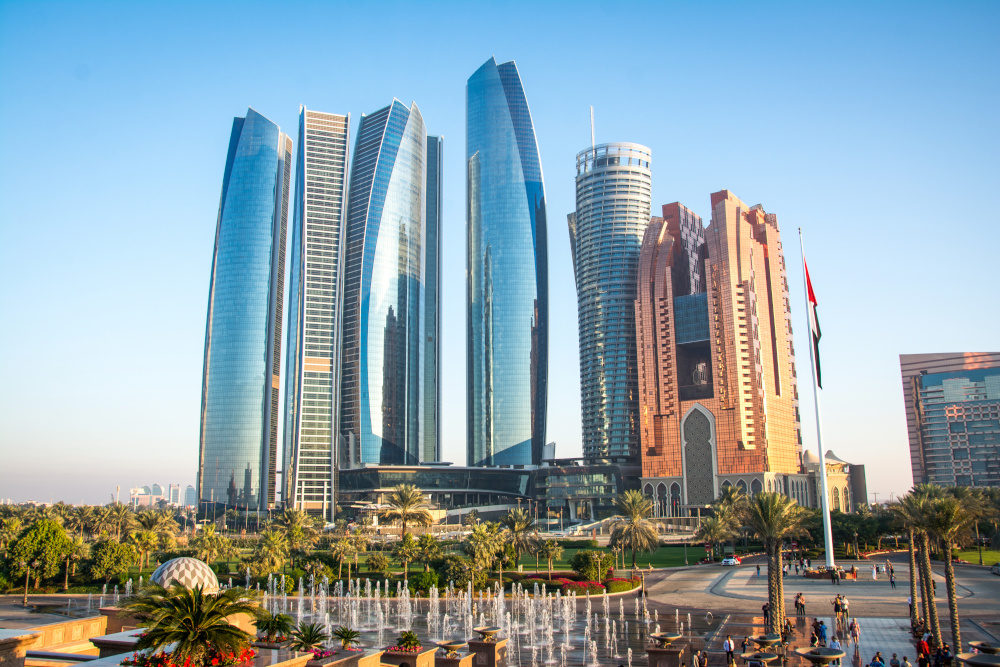 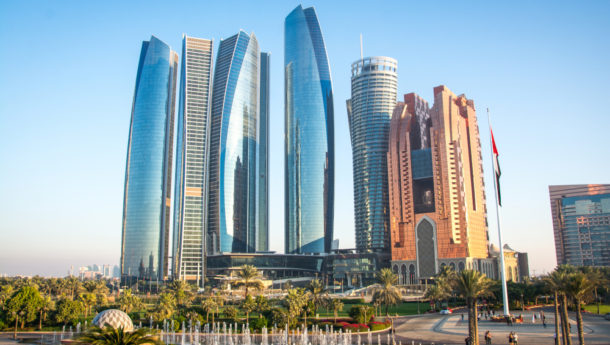 For weather that’s not too hot and humid, January couldn’t be a better choice. Highs of 27°C provide unbeatable sunbathing conditions and even its lows of 20°C ensure comfortable exploring. The sun shines for just over 10 hours a day and reaches over 11 hours by the end of the month. During this time the humidity reaches 69% and there’s only 22% chance of clouds – you’re in for a warm one.

As the capital of the United Arab Emirates, this one-of-a-kind destination is on many wish lists. Its 21st century cityscapes combined with traditional values and desert landscapes provide a diverse getaway. Home to the world’s fastest rollercoaster, world’s highest observation deck and largest picture frame – Abu Dhabi has broken over 186 world records.

You’ll find the biggest and best here from its F1 circuit to its Warner Bro Studios and humongous waterpark in Yas, activities are by the boatload. And you can’t forget its stand-out architecture with it habitating one of the largest mosques in the world and the famous Sky Tower which is over 1000 feet high.

Sun fact: Although the temperatures are hot, it’s important to bear in mind that you’re asked to respect local customs in Abu Dhabi. This means women are advised to cover everything from the shoulders down to the knees and men are refrained from wearing shorts in most public places.

InterContinental Abu Dhabi: How could you possibly resist this 5 star number? Owning a private beach and marina, you’ll feel like a VIP that’s for sure. Its grand ballroom hosts elegant evenings, while its health club offers face scrubs of all kinds and suites boast incredible yacht views.

Bab Al Qasr Hotel: Take your pick from palace or sea views, in modern yet Arabesque interiors. Its location is one of the best in the city and its 35-metre pool is just as impressive. Rooms range from superior king suites to presidential options, there’s something spectacular about the Bab Al Qasr Hotel.