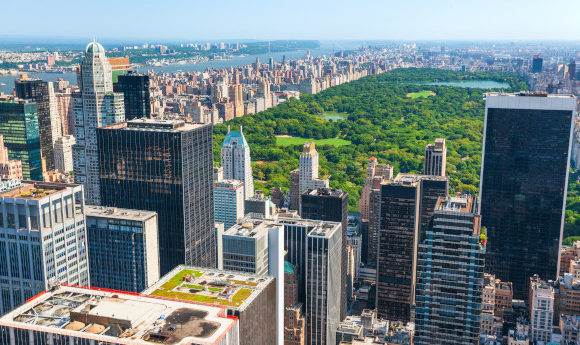 Heading to the city that never sleeps? New York is made up of five boroughs along the Hudson River including big-name hotspots such as Manhattan and Brooklyn, making it hard to find the perfect base during your city break.

With bucket list wonders scattered across the ‘Big Apple’ such as Central Park, Yankee Stadium and the legendary Empire State Building, it’s important to place yourself in the heart of all the action.

Revel in its urban oasis, bustling Financial District and gaze out onto awe-inspiring vistas from 103-story observation decks. We’ve got all-singing, all-dancing areas for party-goers, an oasis for shopaholics and hideaways ideal for peaceful retreats.

Experience all this and more on your doorstep when we reveal the best areas to stay in New York.

Location highlights: Also known as ‘Downtown Manhattan’ and famed for its historical architecture, place yourself among Federal Hall and Trinity Church. It’s the beating heart of America’s stock exchange with Wall Street covering eight blocks of the borough. Here is also where you’ll find the new World Trade Centre, which is highly recommended for its sweeping 360-degree views.

Look below and find the remains of the Twin Towers, which have been replaced with two breathtakingly beautiful fountains in honour of the people who died. There’s also the memorial museum onsite containing artifacts of the September 11th tragedy.

Within walking distance there’s Battery Park, which leads you to the ferry port for the Statue of Liberty and Ellis Island. Among the streets of countless banks, stumble across rooftop bars, traditional diners and a luxury shopping mall known as Brookfield Palace.

Getting around: Believe it or not, you can walk from Lower Manhattan to Midtown in just over an hour. It’s massively recommended for those wanting to explore the hidden cobbles of the city – who knows what quirky stores or bars you may stagger across.

Alternatively, purchase a metrocard for as little as $6, this will cover both the subway and bus. Much like London, there’s a subway station on every corner. However, if you’d rather flag down a yellow cab you won’t struggle with the majority hogging Manhattan’s roads.

It’s easy to get a taxi around the lower district, as it’s less busy. But if you’re heading to the centre this can be a pricey affair and a slow one with congestion on most routes.

Top tip: Staying in Lower Manhattan is the ideal spot to soak up the sights from the sky, check out Liberty Helicopters and weave your way in and out of epic landmarks or cruise across the Hudson River.

Location highlights: The centre of Midtown West and a pedestrian plaza, say hello to the dazzling Times Square District. Stretching from north and south from 40th to 52nd street, then east to west from eighth to Sixth Avenue – this large neighbourhood has it all.

Full of energetic holidaymakers, larger-than-life billboards and costumed characters – this lively spot will keep you entertained.

Your next-door neighbour is Broadway which contains 41 professional theatres showcasing huge hits such as Beetlejuice and Aladdin. It’s also one of the best areas to stay in New York at Christmas, with its world-renowned New Year Ball Drop. This district has had its fair share of movie stints too, featuring in Breakfast at Tiffany’s and The Avengers.

Best for: Nightlife and landmarks

Getting around: As one of the most accessible destinations in New York, find multiple subway and bus routes. Street and Rockefeller Station will be your go-to if you wish to venture further afield.

Despite that, you’re based in the core of Manhattan which means you can walk to almost every major attraction. Not to mention the areas of Hell’s Kitchen, Midtown, Upper East Side and Chelsea are within easy reach by foot.

Did you know? Times Square is named after the New York Times and was originally named Longacre Square until 1904.

Top tip: If you’re considering a hop-on-hop-off bus, every company stops at Times Square. Keep that in mind when you’re figuring out the best way to get around the city.

Location highlights: As the home to the city’s most symbolic buildings, this is one of the best areas to stay in New York. At your fingertips you’ve got a 1,454-foot-tall skyscraper or jaw-dropping sights of Manhattan from the 70th floor at the Top of the Rock.

At Christmas time this district really comes to life with an ice-skating rink, the famous tree lighting, Macy’s Parade and the Rockettes extravaganza at Radio City Hall. And when it comes to shopping, there’s no escaping the designer brands at Saks Fifth Avenue.

Jam-packed with must-visit sites, why wouldn’t you want all this at your disposal? Nestled among the big-name allures, find fine dining restaurants and quirky bars. After all, most things in the city are open all day long.

Getting around: If you want to save a fortune on taxi fees, this is the place to stay. Everything is within walking distance, minus a few highlights in Lower Manhattan which can be reached via the train or bus.

There are several subway stations including St-Herald Square, Grand Central, Fifth Avenue and Rockefeller Centre which will navigate you through the city that never sleeps. There’s a tube every two to 10 minutes and it’s a 24-hour service.

Top tip: Save the Top of the Rock for night time, this is when you’ll see the city light up. Also keep a couple of quarters handy for the telescopes which provide clear views as far as the Statue of Liberty.

Location highlights: Chelsea is one of the trendiest destinations in New York for its art-infused streets, flea markets and delicious food stalls. Amidst luxury high-rises and rustic 18th century townhouses, there’s a wealth of gay bars – after all, this cutting-edge neighbourhood is Manhattan’s LGBT spot.

The nightlife here is admired across all of the city, as it boasts fancy gourmet spots and hip music venues including Jay-Z’s 40/40 Club.

You’re not far from must-visit highlights either with Central Park only 15 minutes away boasting a zoo, horse and carriage rides and movie bicycle tours which will take you to locations such as the famed Friends fountain, the bridge in Home Alone 2: Lost in New York and the ice skating rink in Serendipity.

Of course, you’re only footsteps from Chelsea Market, also known as the ‘Meatpacking District’ with its urban food court and retail therapy delights. And at Christmas watch it come alive with exclusive mulled-wine wooden chalets and handmade gifts.

Best for: Art and nightlife

Getting around: Take the 1, E or F train to 23rd Street and walk to Ninth Avenue. However, strolling around the area is the best way to explore the city with 200 galleries among its streets.

It’s within the district of Hell’s Kitchen and perched along the Hudson River, placing you within feet of the Big Apple’s mesmerising sights. Look for the M7, M10, M11, M12 bus routes to take you to Midtown.

Did you know? Chelsea Pier was the primary luxury ocean liner terminal from 1910 until 1935. The RMS Titanic was due to head to this pier before it sunk in 1912.

Location highlights: Bordering Queens and Long Island, this borough is the best area to stay in New York on a budget. But don’t be fooled by its price tag, Brooklyn is only more affordable because it’s on the outskirts of Manhattan, so it takes a little longer to reach popular landmarks.

However, it’s ideal for those wanting the best of both worlds with its relaxing ambience, while still sitting close to the city’s biggest marvels.

Nevertheless, this hotspot has its own adventures and hidden gems such as Coney Island, which is celebrated for its Cyclone roller coaster and 4th July hot dog eating contest.

In addition to amusement extravaganzas, there’s Brooklyn Bridge which is a National Historic Landmark by the National Park Service and one for the camera with its magical views of New York. Sports fanatics won’t be let down either, with Barclays Center showcasing major hockey and basketball events.

Best for: Seclusion and affordable accommodation

Getting around: It will take roughly one hour to reach Manhattan via car or taxi, you can also take the bus from Nostrand Avenue and it will take about 40 minutes.

The subway is the most cost effective and shortest journey at $6 return with 30-minute duration. Not to mention there’s a New York water taxi which can do a complete loop of the island – the options are endless.

Top tip: Save some money and join free walking tours, the most popular is Free Tours by Foot which has the down-low on food and sightseeing excursions.

Did you know? For further information on the city that never sleeps, check out our New York Travel Guide for safety advice, culture and best time to travel information.

So, what kind of traveller are you – do you want to stay in the heart of the action or on the outskirts where the city’s best-kept secrets are stored? Either way, we’ve revealed the best areas to stay in New York with our handy guide – now it’s time to book! 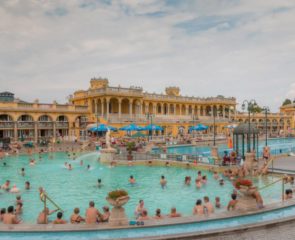 A Complete Travel Guide to Budapest 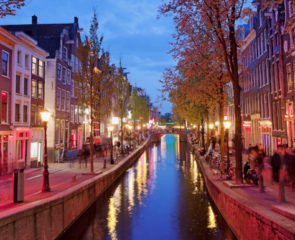 The Most Awesome Cocktail Bars in Amsterdam