Italy is home to some of the most beautiful and intriguing cities in the world. This, alongside the fact it is only a few hours flight away, makes it the ideal destination for a city break.

The problem is deciding which destination you want to visit first. So, to help you decide, here are the five best Italian city breaks. 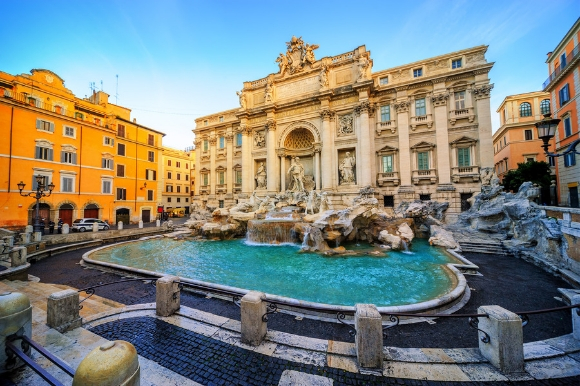 Where is it? The Italian capital is situated in the heart of the country, in the Lazio region, just 15 miles from the Tyrrhenian Sea.

Why go? The whole city is a UNESCO World Heritage Site. Wander the streets of ancient Rome and as you take in the lively atmosphere, you’ll see ruins from the Roman Empire around every corner and discover a history that dates back thousands of years.

Stop to throw a coin in the world’s most famous fountain and admire the work of renowned artist, Michelangelo – including the most beautifully decorated ceiling you’ll ever see at the Sistine Chapel. The capital is also the best place to shop as it is home to many Italian luxury brands such as Valentino, which originated here.

This city is small enough to walk around and see it all during your break and whether you visit in summer or winter, it enjoys a mild climate all year round.

Eating and drinking: During the day the chairs outside cafes that line the picturesque streets and piazzas are filled with people sipping on strong coffee and watching the world go by. As the sun starts to go down they head out for an aperitivo – pre-dinner drink – and then, after dining alfresco, enjoy a gelato – Italian ice-cream and experience the nightlife.

You may have eaten spaghetti alla carbonara before, but if you haven’t tasted it in Rome, you need to. The dish originates here and is bellissimo! Pizza is delicious across the country but it is a speciality in the capital – sample it by the slice at Pizzarium, on Via della Meloria.

Day Trips: You can easily visit Florence, Pompeii and Tivoli as well as seeing the beautiful coastline during day trips from Rome. 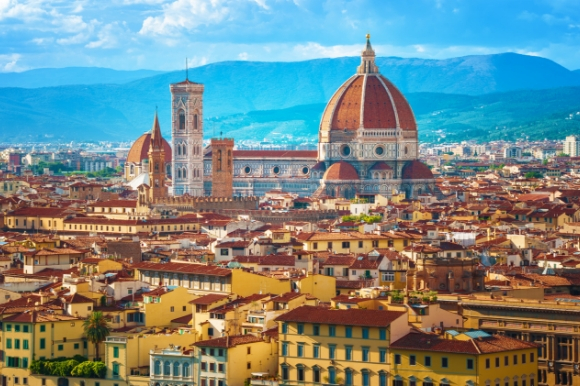 Where is it? The capital of Tuscany is situated on the Arno River, in northern Italy.

Why go? The romance is palpable in this beautiful city, making it hard not to fall in love with Florence. The historic centre is a UNESCO World Heritage Site and among the cobbled streets you’ll find architecture that is virtually unchanged from the Renaissance period.

It’s also one of Europe’s greatest art cities. There are more than 60 museums and galleries including the Uffizi Gallery which is the most visited in the country, featuring work from the world’s most famous and influential artists. Giotto’s Frescoes, Michelangelo’s David and canvases by Botticelli and Leonardo da Vinci are all displayed here.

Eating and drinking: On most menus you’ll find tagliatelle funghi porcini e tartufo – the two main ingredients, truffle mushrooms and porcini mushrooms, are local. Although, arguably the city’s most famous dish is bistecca alla fiorentina also known as Florentine steak. To finish, you have to taste the gelato – Florence has some of the best in Italy.

You can’t visit the capital of Tuscany without trying Tuscan wine. The country’s best-known red wine, Chianti, is produced here. If you prefer white then try Vernace, which comes from the medieval town of San Gimignano.

Day Trips: You can visit Pisa from here – if you want to tick off two famous cities during one trip. You’re also a short distance from Livorno, the most modern port city in Tuscany. Plus, it is easy to reach Fiesole, a hilltop town with a Roman amphitheatre.

Tourist Valerie Millard said: “We reached Florence by train from Venice. We stayed right by the tourist bus stop and managed to get back each evening for 6pm, when happy hour began! The hotel had a small but beautiful courtyard and each evening, they put out wine, beer and tasty snacks, which you simply helped yourself to.

We used the tourist bus to get around and there were some fabulous views – if you read Dan Brown’s Inferno you will see all the places he wrote about. The highlight for me was the sunset on the Ponte Vecchio, which is the main bridge over the River Arno, and described in Brown’s book in fabulous detail.” 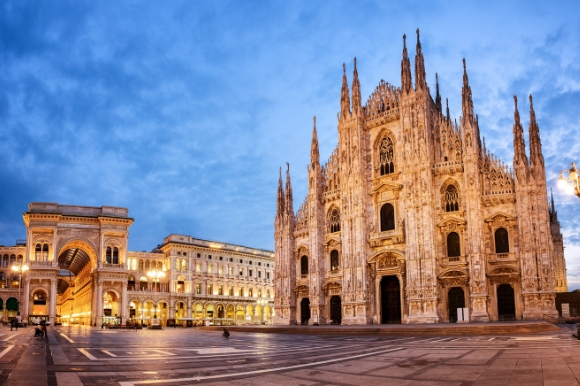 Where is it? The capital of the Lombardy region is situated in the north of Italy, just a short distance from the Alps and the border of Switzerland.

Why go? Milan is a glamorous city and one of the most important fashion capitals in the world. As well as hosting ‘fashion week’ it is home to high-end designers in an area known as the ‘Golden Triangle.’ Here you’ll find Italian brands including Prada, Armani and Versace. It’s also known for its spectacular architecture and art, such as Leonardo da Vinci’s Last Supper, one of the world’s most famous paintings

If that is not enough, it’s home to two football teams – Inter Milan and A.C. Milan as well as San Siro Stadium, the largest stadium in Europe.

Eating and drinking: You can order pizza and pasta here but its traditional dishes are actually centred around meat and rice. On the menu in Milan you’ll find cotoletta – buttery veal – as well as saffron risotto. The city also has the highest number of Michelin-starred restaurants in the country.

But, before you go out for dinner you need to have an aperitivo. This pre-dinner drink is a ritual in Milan and usually takes place between 7pm and 9pm. It’s common to find snacks which can be enjoyed alongside your beverage. After dinner, craft beer is popular and you’ll find breweries throughout the city.

Day Trips: You can get the train from here to Lake Como – which is a favourite among A-listers – and the medieval city of Bergamo is just a short distance away.

Holidaymaker Kirsty Daniel said: “Milan feels like a city where ‘real’ people live. The scenery and landmarks are stunning, as you would expect. But, unlike other Italian cities, where mostly there are your stereotypical Italian family trattorias and tourist traps, Milan offers varied restaurants and proper cocktail bars.

It also has more of a business-like buzz around it, making it much quieter during the daytime. Free walking tours are an absolute must for city breaks – the guides really get in depth about the history of the city and its landmarks so that you get the most out of the tour. This Italian city is ideal for football fans because the San Siro Stadium offers tours. The shopping is excellent, obviously, and it’s also wonderful for history fans.” 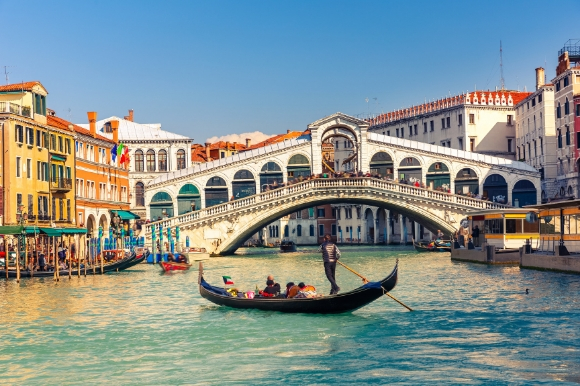 Where is it? The capital of the Venetia region is situated on the northeastern coast of Italy.

Why go? The Floating City of Venice is considered to be one of, if not the most beautiful and romantic city in the world. It is formed of 118 small islands, which are connected by canals and bridges – making it one of the most unique, too. It’s perfect for a city break because as well as exploring the waterways on a gondola, you can easily discover the whole city on foot in a few days.

Eating and drinking: To start it’s cicheti, Venetian tapas, followed by fresh seafood from the lagoon. For dessert, you have to try tiramisu – while its exact origins are unclear, it’s believed to have come from around this area. You’ll find it in many of the restaurants here and it’s delicious. Pay a visit to Caffè Florian in San Marco Square and sit in the same seat as the likes of Charlie Chaplin and Andy Warhol.

Day Trips: It’s easy to get a water bus over to islands including Lido and Burano. You can also visit Lake Garda and Verona from here.

Kelly Barnett said: “Venice is a magical place – it’s unlike anywhere else I’ve been. There are no cars, which creates the feeling of travelling back in time, and the buildings are really beautiful. St Mark’s Square is impressive in the evening and the Basilica is well worth a visit. The best way to arrive in Venice is by private water taxi – it’s romantic and the views are incredible. Although you’re in Italy, bear in mind that pizza is not a Venetian dish so try other staples, such as seafood pasta.”

Where is it? Pisa is situated on the River Arno in the Tuscany region in northern Italy.

Why go? An architectural project gone wrong put Pisa on the map. Join the tourists who find ever-inventive ways to bend their body and pose alongside the Leaning Tower. Get the perfect snap by holding it up with your hands or pushing it with your finger.

Once you have admired it from the outside, walk in the footsteps of Italian astronomer Galileo Galilei by heading inside and up the steps to take in the view. Although this is the most famous, all the architecture in the Square of Miracles is beautiful and there is plenty more to discover around every corner of this lively city.

Eating and drinking: Due to its close proximity to the coast, seafood restaurants are popular in this city. You have to try cecina here – this bread can be eaten alone or alongside your meal. One of the most famous pizzerias in the city, Pizzeria Da Filippo, is the best place to sample it. There is also a lively bar and cafe scene due to the student community that attend the country’s elite universities in Pisa.

Day Trips: It’s easy to reach both Florence and Lucca from Pisa, if you would like to explore more of Italy once you have discovered everything this wonderful city has to offer.

So, which city do you fancy visiting first? 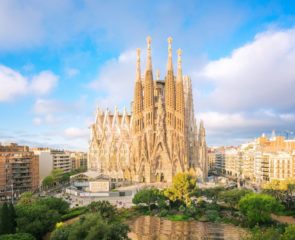 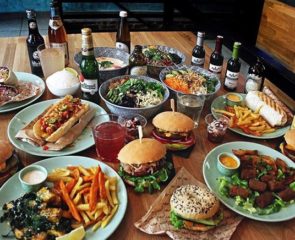 The Top Vegan Restaurants in Prague

A Complete Travel Guide to Budapest