Fuerteventura has long been attracting visitors, enticing them with its vast sandy shores and year-round sunshine.

It is the second-largest and longest of the popular Canary Islands. It sits in the Atlantic Ocean, nestled between Lanzarote and Gran Canaria.

Due to its location off the coast of north-west Africa, Fuerteventura enjoys scorching summers and warm winters. It is only 62 miles from Africa but retains a wholly Spanish feel.

The name ‘Fuerteventura’ translates to strong wind and it’s an apt name for the island that is subject to a continuous cooling breeze. It’s a perfect place for families, couples and popular with surfers all year. 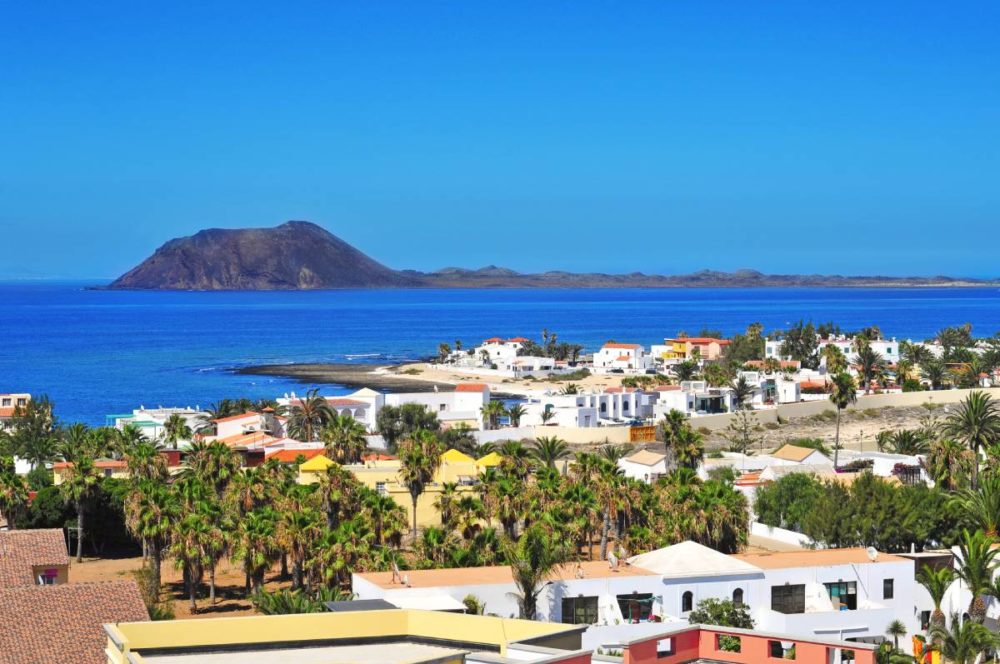 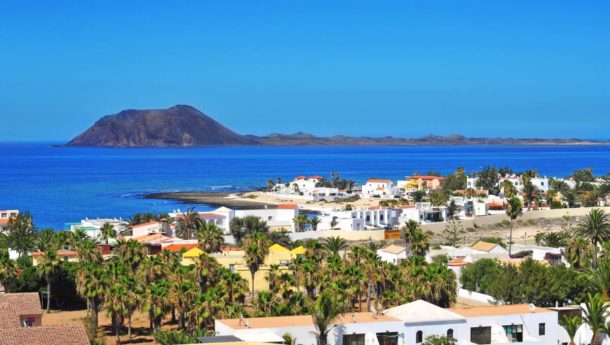 Fuerteventura at a glance

Fuerteventura has some of Europe’s best beaches, is a magnet for watersport lovers and serves up a host of culinary treats.

It’s never a struggle to find things to do in Fuerteventura where you can encounter wildlife, historic windmills, embark on 4×4 safaris or just soak up the plentiful sun.

The oldest of the Canary Islands, Fuerteventura was named a Unesco Biosphere Reserve in 2009.

All the Canary Islands including Fuerteventura are incredibly safe. However, you should still take out travel insurance just to be on the safe side. You may also want to leave any valuables in the safe in your accommodation or make sure they aren’t on show if you do need to have them with you.

Fuerteventura enjoys pleasant weather all year round. Make sure you wear sun cream and ensure you top it up, especially if you are in and out of the sea or pool. It’s also worth being aware that there is a breeze, especially during the summer, which can make it feel cooler than it is. You should also make sure you drink plenty of water.

Public buses serve the island of Fuerteventura well, though there are no direct services between all resorts and the airport. It’s best to check or to organise an airport transfer depending on where you decide to stay. The popular resort of Caleta de Fuste and capital Puerto del Rosario have good bus connections with the airport.

Taxis are plentiful and short journeys are often inexpensive. Travelling further afield in a taxi can see fares inflate so it is best to check rates at the beginning of your journey.

You may like to hire a car so you can explore the island at your own pace. Despite being the second-largest Canary Island, it only takes around two hours to drive from one end to the other.

The average cost of accommodation in Fuerteventura is 49€ a night.

The beaches are one of the main reasons that tourists flock to this Canary Island but between soaking up the sun on the sand and swimming in the turquoise ocean, here are some of the attractions you might like to visit. 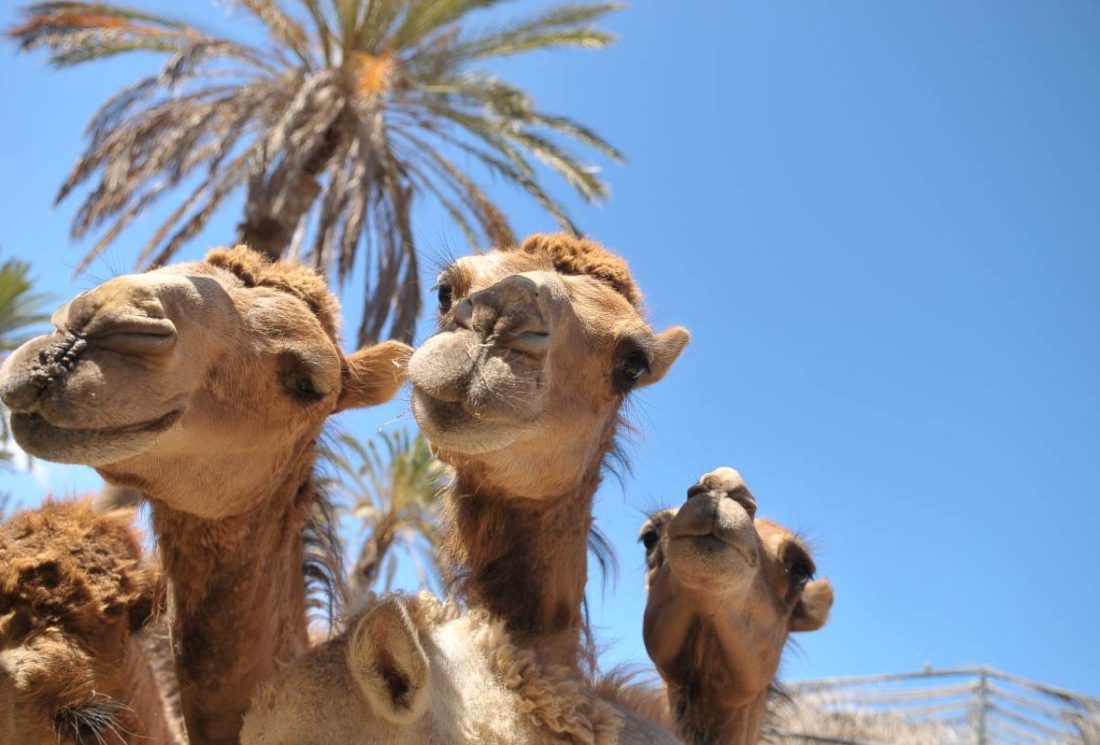 Fuerteventura’s Oasis Park is home to more than 3000 animals and 250 different species and the largest camel reserve in Europe.

The park has the island’s only Botanical Garden at its centre and is as proud of its flora as it is of the interactive animal experiences it offers. Experiences on offer include camel safaris, getting in the water with sea lions and up close with lemurs. 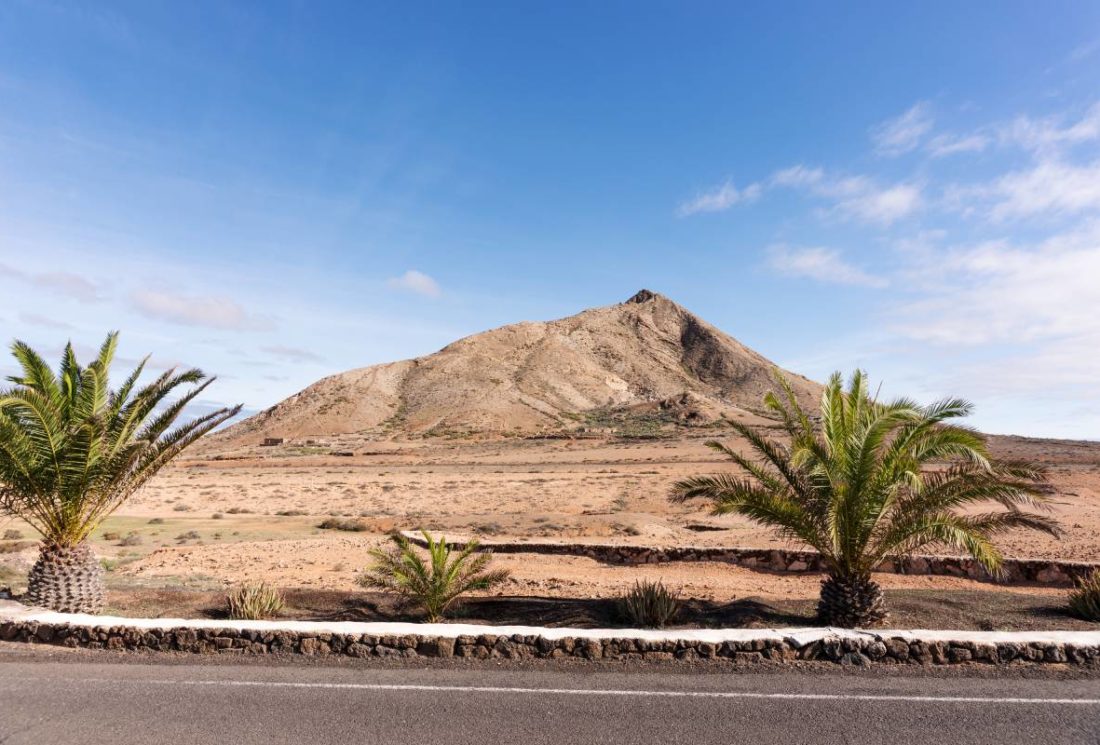 Found in the north east of Fuerteventura, Tindaya Mountain was considered sacred by the island’s first inhabitants and glistens with beautiful colours.

Religious inscriptions, burial constructions and carvings in the shape of footprints add to the mystique of this important site.

The summit reaches 400m above sea level and can be reached via a simple hiking trail. 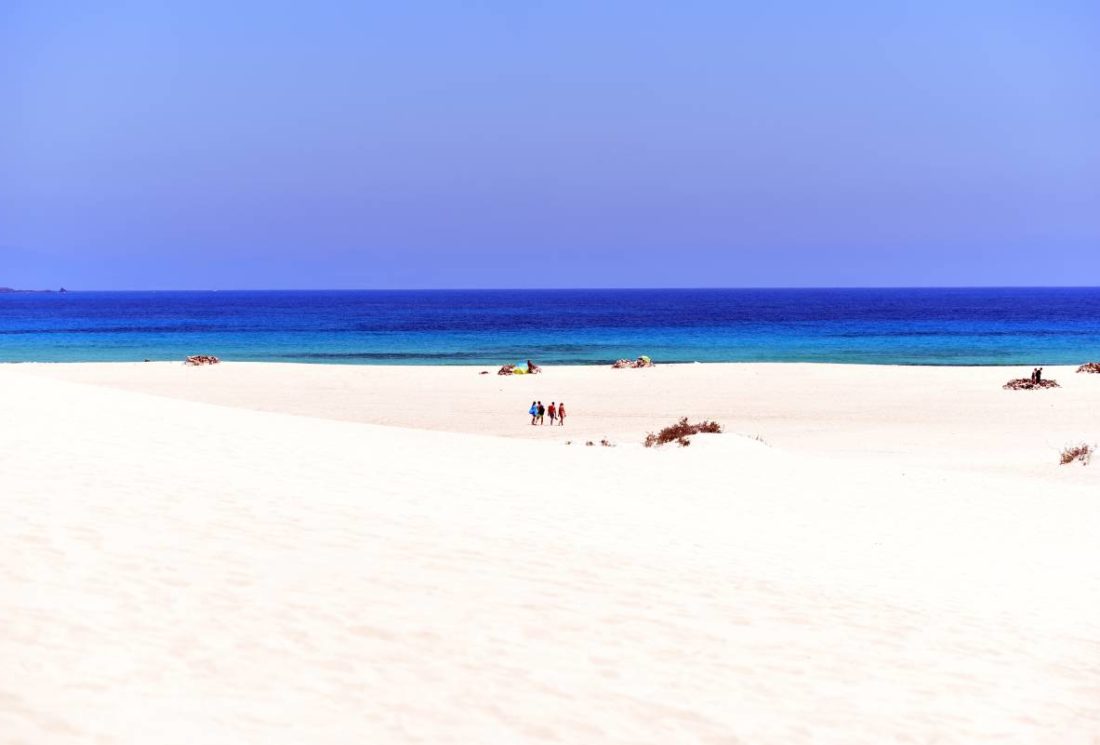 The breathtaking Corralejo Natural Park is a union of vast desert, sand dunes and turquoise sea.

Running along the eastern coastline of Fuerteventura, the dunes provide for stunning views and photo opportunities.

The natural park is a pristine and special place.

The best beaches in Fuerteventura

Fuerteventura is roundly accepted to have the best beaches in the Canaries and even boasts some of the best in Europe.

The island has more than 120 miles of sun-drenched shoreline and crystal clear waters.

There are more than 150 beaches to choose from. 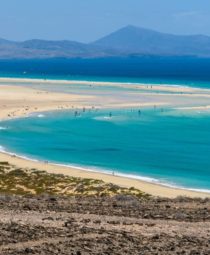 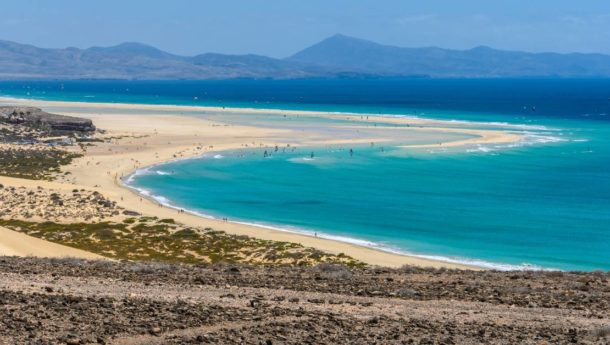 The remote Sotavento Beach, on the south east coast of Fuerteventura, is a haven of powdery white sand, year-round warm water and vast expanses of deserted sand.

Its dunes provide shelter from the windy conditions that contribute to this beach also being a paradise for surfers, kite surfers and windsurfers. 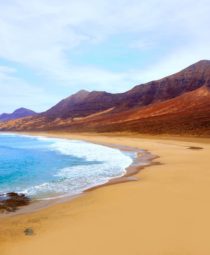 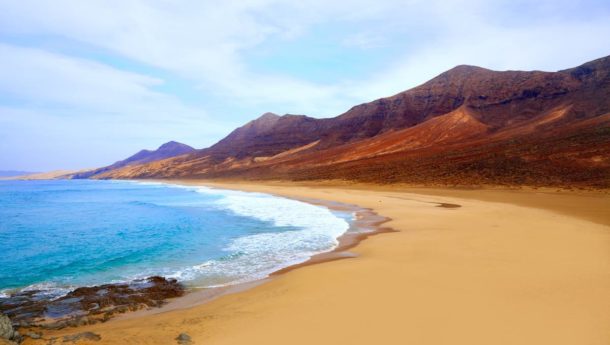 Accessed via a dirt track, Cofete is in the south west of Fuerteventura and offers remarkable beauty.

You’ll find a 12-mile stretch of sand with the Jandia Mountains as its backdrop. There are few people and no amenities here, which is part of its charm. 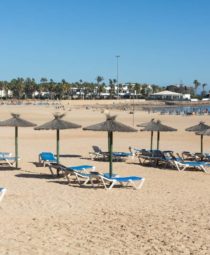 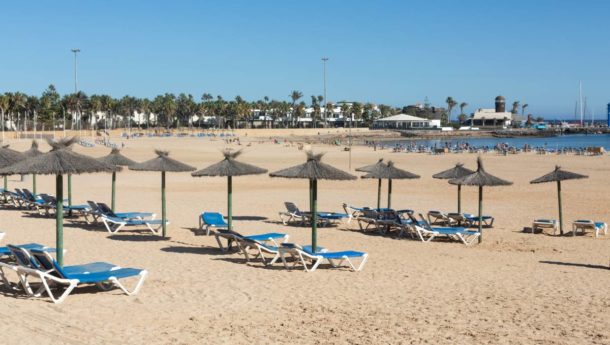 For something a little less isolated, El Castillo beach in Caleta de Fuste is a more mainstream but no less attractive option.

There are all the amenities you could desire as well as white sands. This beach is popular with families and couples alike.

Water sports are available, a swimming area and, just off the beach, two reefs, perfect for snorkelling or even scuba diving.

Lobos Island is a wonderful place to visit and is just over a mile from Fuerteventura, via ferry from Corralejo in the north.

A 10-minute crossing takes visitors to the small island which is a protected nature reserve that is largely uninhabited. The island was named after the monk seals that once lived there. It is now home to rare plants and birds. The Punta Martino Lighthouse is one of few distinct landmarks within this natural refuge. The island is a perfect spot for snorkelling, with an array of colourful fish.

From Corralejo, it is also possible to head across to Lanzarote’s Playa Blanca to get a feel for one of the other Canary Islands. Ferries are frequent and the crossing takes about 25 minutes. 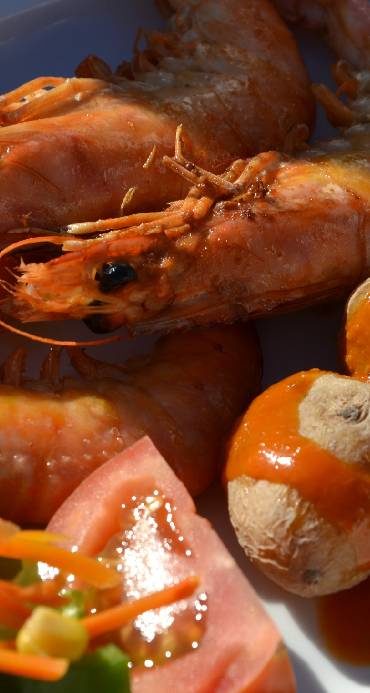 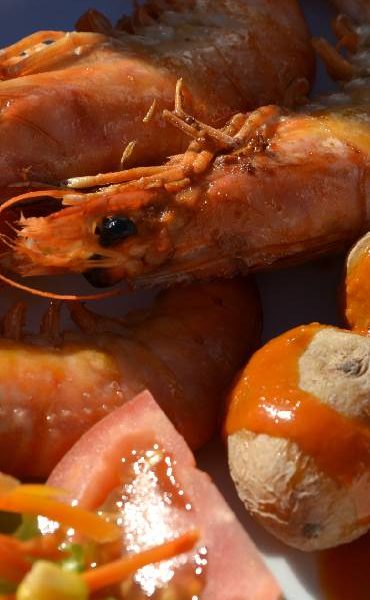 Food and drink in Fuerteventura

Unsurprisingly, Fuerteventura’s cuisine is packed with delicious fish and seafood-based dishes served up at the plentiful eateries.

Papas arrugadas, which translates as wrinkly potatoes, is a dish of salty, boiled, unpeeled new potatoes usually served with a garlicky, pepper sauce. It is a favourite of the Canary Islands.

For cheese lovers, Majorero is a traditional local variety made with goat milk. On Fuerteventura, there is the chance to learn all about it at the Majorero Cheese Museum, which also gives insight into the history and formation of the island.

Fuerteventura is also a fine place to try the refreshing cocktail of Calimocho – red wine and coke! The mix is available in a surprising number of destinations, including South Africa, Croatia and Chile, but believed to originate in Spain. Local beers to try on the island include Tropical and Dorada, which are both popular across the Canaries. 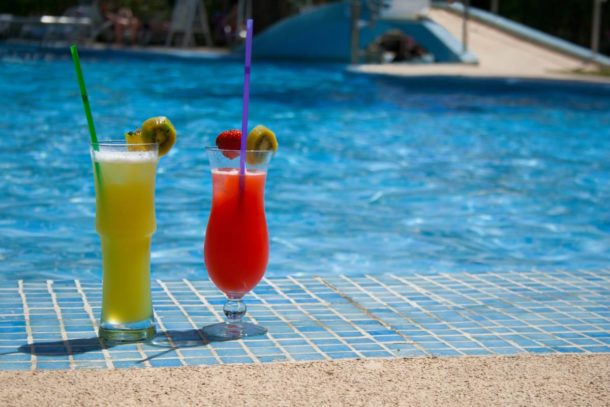 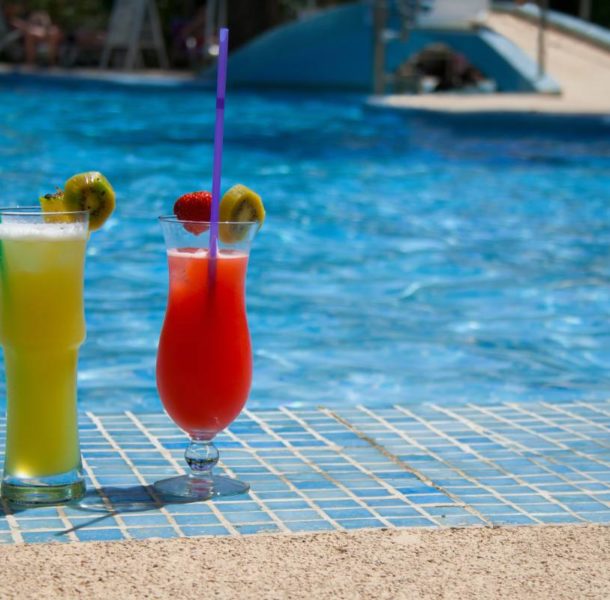 Fuerteventura’s main tourist resort Corralejo is where you’ll find the most nightlife on the island.

The main strip, Avenida del General Franco, through the centre of town, offers a plentiful and buzzing array of late-night bars and clubs. The Centro Comercial Atlantico is the centre of the evening action. The northern end of the strip tends to be more relaxed, with smaller bars where you’ll be able to hear traditional Spanish music. More British pubs are also in evidence.

Fuerteventura has many treats for shopaholics with an abundance of small, independent stores as well as larger shopping centres to choose from.

The largest shopping centre on the island is Las Rotondas, in Puerto del Rosario, Fuerteventura’s capital. Dozens of shops are set out over four, refreshingly air-conditioned, floors. Outside of the centre, amidst the capital’s streets, many other stores can be uncovered on a stroll, often with frontages that belie the size of what is within.

Outside of the capital, all of Fuerteventura’s resorts offer shopping opportunities and supermarkets.

In addition, Fuerteventura offers many intriguing local and craft markets. Among markets on offer are those that can be found in Corralejo, Caleta de Fuste, Morro Jable and Costa Calma.

The Canarian Art Centre is an engaging cultural offer in Fuerteventura, where the walls are lined with works and you can view painting and sculpture. The centre is a private initiative by Manuel Delgado Camino Mané. Some of the works are displayed in a semi-underground space that is quite magical. A garden filled with native flora is interspersed with sculpture too.

Outdoor sculpture is also available across Fuerteventura’s capital Puerto del Rosario. There are more than 100 sculptures, by a broad range of local artists, scattered across the city, offering a breadth of diversity and interest. 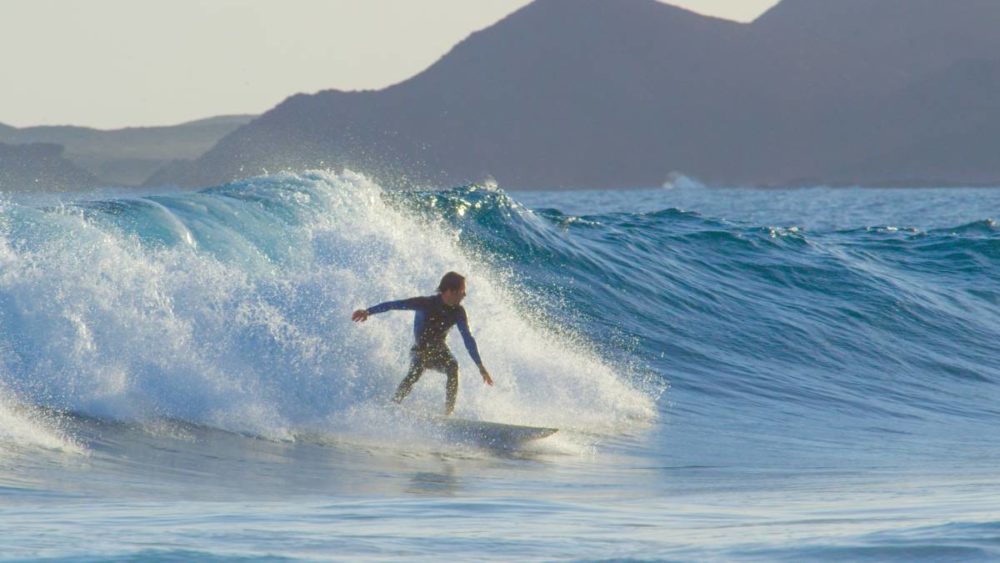 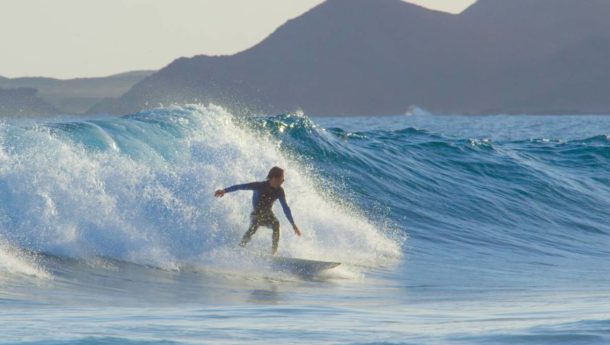 With its amazing year-round climate, Fuerteventura is the place for outdoor adventure, especially water-based activities.

With strong winds and waves of up to two metres high when the elements come together it is a haven for surfing, windsurfing and kite surfing. The west and north coasts are particularly exposed.

Snorkelling and scuba diving can be enjoyed in Fuerteventura, especially off the north coast.

The island also offers many interesting walking and hiking routes.

Once you have experienced the touristy side of the island, you may like to step off the more traditional trail and see the side that visitors often overlook. 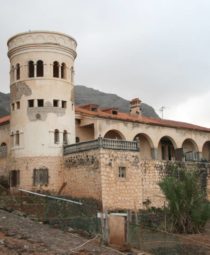 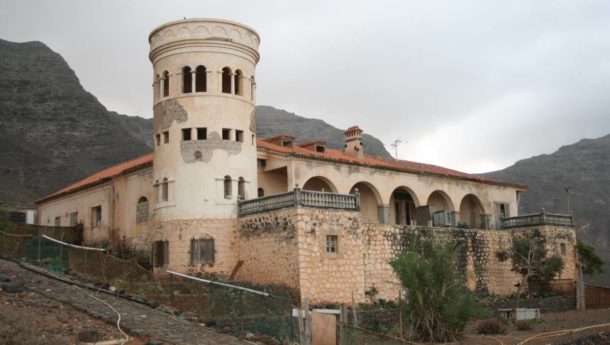 Shrouded in Nazi conspiracy theories, Villa Winter, near the village of Cofete, on the Jandia peninsula, is an intriguing attraction. It was built by Gustav Winter, a German engineer and it is rumoured a beacon in the tower was used to signal Nazi u-boats. Visitors are often allowed inside for a tip under an informal arrangement. 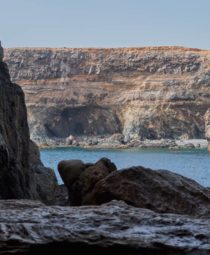 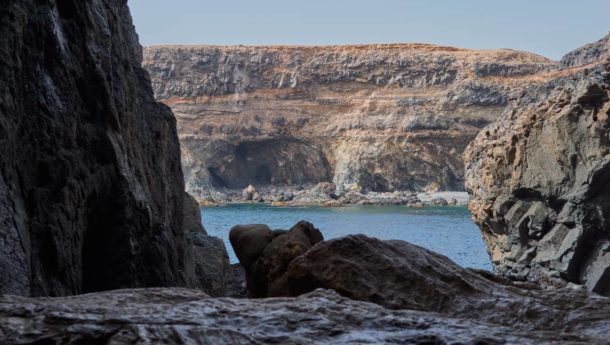 Apparently once the hideout of pirates, a trip to the giant Caves of Ajuy is a humbling experience. The caves are found via a clifftop walk with beautiful ocean views. The interconnected caves are accessible via a stone staircase and can be explored within. The area of Ajuy is where some of the Canary Island’s oldest materials, such as marine fossils, have been uncovered. 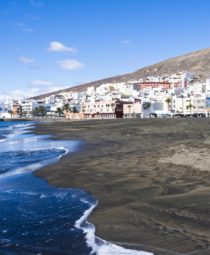 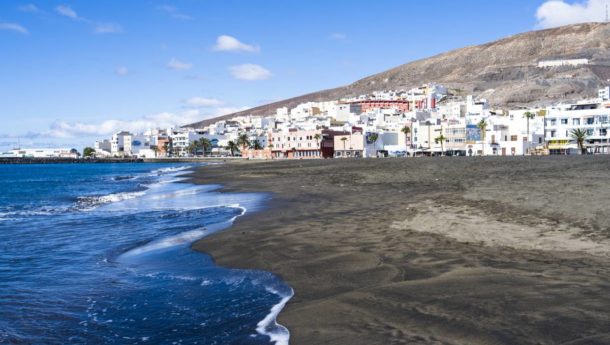 Gran Tarajal Beach does not tend to be visited by tourists, rather tending to attract locals and expats.

The dark sand is an interesting site in itself and nearby you’ll find the harbour and marina, plus many restaurants serving locally caught fish and seafood.

Best times to go to Fuerteventura

Fuerteventura is a year-round destination, making it ideal whether you are planning a summer holiday or looking to escape the cold winter months.

Late spring and early summer are sunny and pleasant, with temperatures in the mid-20s.

The island is subject to little rain and what there is tends to fall in December and January.

During the summer it has been known to get as hot as 40°C and it’s worth noting, especially during the winter months, that the evenings can be quite cool.

It is quite breezy all year round and there is a chance of sandstorms as the island is so close to the Sahara desert – this tends to be from February to April.


Now you know what to expect from this beautiful Canary Island, you can start planning your itinerary and ensure you make the most of your time in Fuerteventura.

Let us help you find the perfect holiday destination for you