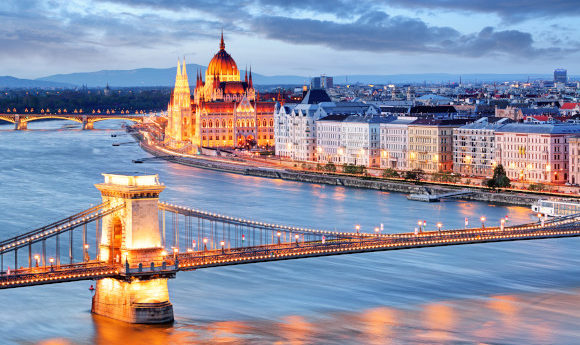 Whether you’re looking for somewhere to celebrate Valentine’s Day or you want to make a grand gesture which isn’t cliche, nothing says ‘I love you’ like a city break for two.

Treat your better half to gondola ride in Venice, experience New York City’s Central Park from the seat of a horse-drawn carriage or head for Paris and watch the Eiffel Tower light up as the sun goes down – the possibilities are endless on a love-filled getaway.

Don’t delay – share magical moments with that special someone as we list the most romantic city breaks for couples. 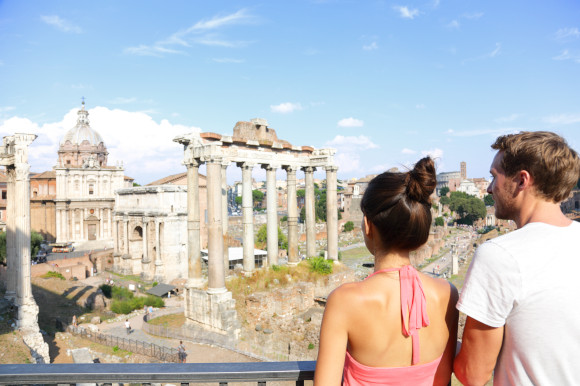 What makes it romantic? A trip to Rome will have you saying ‘Ti Amo’ in no time. From its ornate buildings to its century-old ruins and timeless art, every corner of this city is as enchanting as the next. Recognised as one of the most romantic nations in the world, the phrase ‘when in Rome do as the Romans do’ has never been more fitting.

Linger over home-cooked food from a candle-lit rooftop, head for the Spanish Steps at sunrise and go for a gentle stroll in Villa Borghese Garden, there’s nothing like a local experience. But you can’t come all the way to Italy without laying eyes on the amazing artwork which lies in Vatican City including the must-see Sistine Chapel, Michelangelo’s captivating masterpiece.

Need to know: Don’t want to miss out on those attractions you have always dreamed of visiting? Then we suggest purchasing your tickets in advance. With sights such as the Vatican Museum proving extremely popular, avoid the lengthy queues and save time by planning ahead. Plus, this is bound to earn you some serious brownie points.

Top tip: You’ve seen it in the movies, now it’s time to try it for yourself. Renting a vespa in Rome is the ultimate way to get around. Hold tightly onto your partner as you drive down tight alleyways taking in the city’s biggest sights. 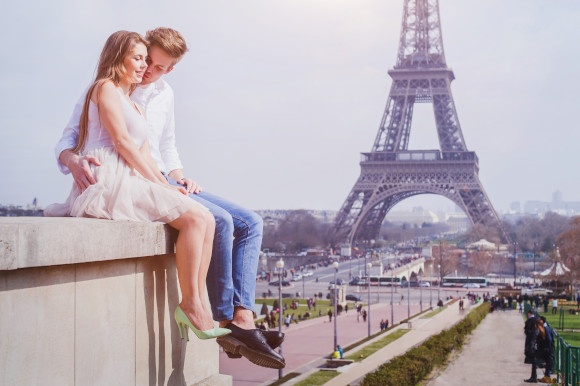 What makes it romantic? Show that someone special just how much they mean to you with a spontaneous trip to the ‘City of Love’. Paris never disappoints when it comes to impressing your loved one. Artists, filmmakers and poets have all flocked to this Frech hotspot for inspiration, proving just how astonishing the city is.

There’s something about the Parison air that leaves you feeling all warm and fuzzy inside.
As one of the most popular spots for marriage proposals, a trip up the Eiffel Tower is a must. Or, if you’re not a fan of heights, wait at the bottom and watch the landmark sparkle every hour under the moonlit sky.

When you’re not hunting down its biggest attractions, couples will love walking hand-in-hand down its tree-lined streets, people-watching from its laid-back cafes and enjoying a romantic picnic in one of its city parks.

Need to know: Learn some French before your visit. Parisians aren’t renowned for their English, so they will appreciate you trying, even if it’s just a few words. Not only is this a great way to break the ice, but it’s bound to impress your partner.

Top tip: Celebrating a special occasion? Make your trip extra romantic and dine at one of the restaurants at the top of the Eiffel Tower. Although expensive, the views are incomparable. Head here for lunch as the prices tend to be cheaper. 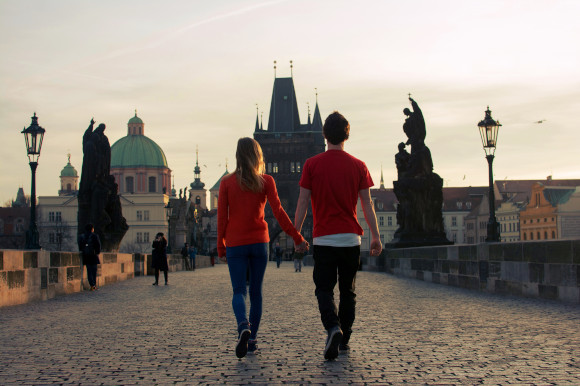 What makes it romantic? Prague may not automatically come to mind when you think of a couples getaway, but it’s surprising just how romantic it is. In fact, the city has dedicated a day to love. On 1st May couples come to Petrin Hill so they can kiss that special someone beside the statue of Karel Macha, a romantic poet. This long-standing Czech tradition is said to mark a blossoming love.

Aside from its beliefs, Prague makes for the perfect date night. Stroll arm-in-arm down slender cobbled alleyways, marvel at majestic architecture, which is symbolic of the city’s history and gaze lovingly into each other’s eyes in one of its cosy dining spots. This captivating metropolis will have you under its spell in minutes.

Need to know: When eating out in Prague, it’s likely that you’ll be presented with bread. This is not complementary and you’ll be charged for it whether it is eaten or not. However, if you don’t want the bread you can kindly ask the waiter to take it away and you won’t have to pay for it.

Top tip: Most people head for the Old Town Hall to see the city from up high, but if you don’t fancy waiting in the lengthy queue we suggest heading to the tower at Charles Bridge. The city vistas are just as impressive from here, plus you’ll get to enjoy undisturbed vistas with little to no crowds – pretty romantic, right? 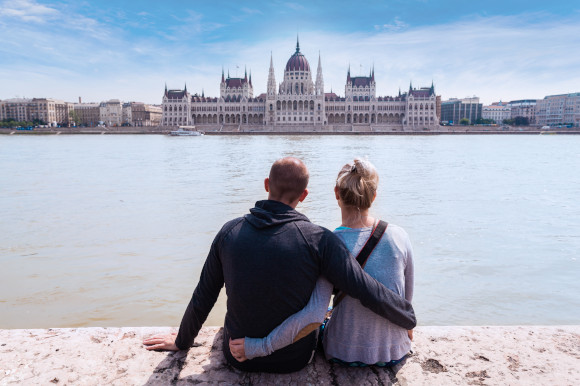 What makes it romantic? Budapest has an irresistible charm, from its Castle District to its river views and its thermal baths. Described as one of the most beautiful cafes in the world when it first opened its doors in 1894, New York Cafe’s decadent design is a must-visit for couples. Whether you choose to treat your other half to afternoon tea, dinner or dessert, every sitting will be just as memorable.

Celebrated for its spas, freshwater springs are all the rage here. This steamed-filled experience is best shared, with Gellert Baths, Lukas Baths and Szechenyi Baths offering the most romantic dips. When it comes to evening pursuits, set the tone for the night with a sunset cruise along the Danube River. Watch the city light up as you glide slowly along the water – it doesn’t get much more idealistic.

Need to know: You may be tempted to clink your glasses together, especially if you’re toasting a time of celebration such as an anniversary or proposal, but we suggest you don’t do this during your time in Budapest. Legend has it, Austrian generals would clink their beers together after the execution of the 13 Martyrs of Arad in 1849. Although no official ban, it’s deemed extremely disrespectful.

Top tip: Don’t fancy the uphill climb to the Castle District? We suggest taking the funicular. Not only is it cheap, but the views across the city are spectacular, especially as you get close to the top. 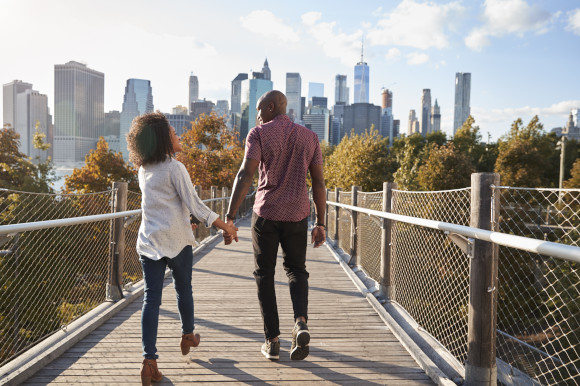 What makes it romantic? The city so good they named it twice, New York has long been a hotspot for couples. This magical destination is a fantastic spot for a date night with a choice of rooftop bars and swanky restaurants dotted across its five boroughs.

Despite having to travel a little further afield, the journey will be worth it when you’re enjoying a horse and carriage ride in Central Park, catching the most popular Broadway shows and experiencing that famous New York skyline 102 floors up from the Empire State Building.

With countless films being shot here – star in your very own rom-com as you stumble across its big-screen locations.

Away from the city’s most recognised spots, you’ll find New York has a whole host of unique attractions, which aren’t listed in its tourist guides. Head to River Cafe for one of the best views in the city or take a gentle stroll through Carl Schurz Park, taking in one photogenic spot at a time.

Need to know: New York’s sidewalks are like roads, and by that we mean they have similar rules. The locals here tend to walk in a line and keep right on the city’s busiest streets. So, we advise you do the same! After all, no one wants to get in the way of a New Yorker who is running late for work.

Top tip: There’s something romantic about a tourist trap without the crowds. Although not guaranteed, if you head for Times Square after 11pm, the streets are relatively quiet. Or, you can always visit after 3pm and experience those bright city lights all to yourselves – now that’s what we call magical. 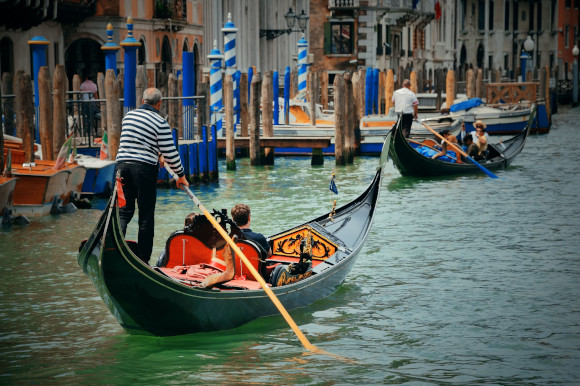 What makes it romantic? Venice is the ultimate couples getaway. Filled with picturesque canals, gothic arches and grand palaces, there’s no denying this city’s beauty. But there’s only one way to show your other half just how much you love them, and that’s a gondola ride.

Although a little cliche, you can’t come to the ‘Floating City’ without cruising along the Grand Canal on a flat-bottom boat. Want to make your journey as romantic as possible? Pay for private tour and enjoy a relaxing voyage with the one you love as your transported across the water by a singing gondolier. You should also pass under the Bridge of Sighs, one of the city’s most magical spots. Legend has it, if you steal a kiss while passing through your love will last forever!

Head to St Mark’s Square at sunset before the day-trippers descend or climb to the top of the bell tower, where you’ll be able to enjoy unmatched views of Venice’s knotted alleyways. Come nightfall, it’s all about cosy dinners on cobbled streets accompanied by candlelight.

Need to know: Unless you have an extremely healthy bank balance, avoid eating in St Mark’s Square. You’ll find better food and drinks options among Venice’s tight alleyways without the hefty price tag.

Top tip: Venice is always overcrowded no matter what season you travel. So, for couples seeking some alone time, we suggest wandering the streets late at night. With most of the day-trippers gone, take your lover by the hand and explore the city one waterway at a time as you listen to the tranquil sound of water breaking on the banks.

Whether you’re idea of romance is a gentle stroll hand-in-hand, a dinner date for two or something cliche – jet off on one of these idyllic city breaks and fall head over heels in love all over again. 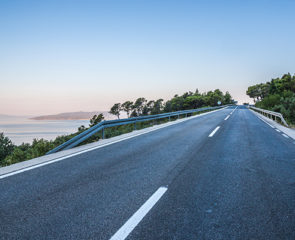 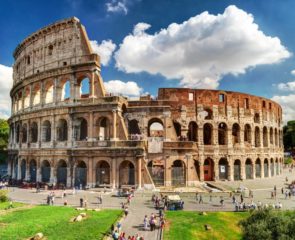 A travel guide to intriguing Italy