Boasting a long and illustrious history with music, Spain is a land of pumping beats and pulsating swagger. From the colourful mainland to the sun-drenched isles, a variety of styles and genres are showcased through animated lyrics, a mingle of instruments and accompanying dances.

For every region, there is a new sound to discover. So, it’s little wonder why musical tone forms an integral part of the Español identity. And with our guide to the most popular destinations for Spanish music, you’ll not only be well-versed in Spain’s tuneful heritage – but know where you should head for this proud nation’s authentic sounds. 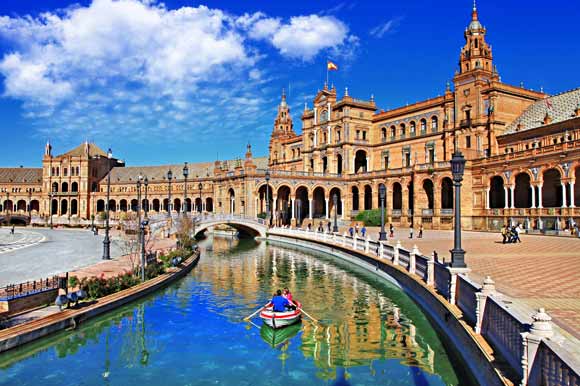 Set in southern Spain, Seville is the life and soul of the party. Music is everywhere in this sun-draped city, bringing residents and tourists together with its infectious tunes.

And while this dazzling Andalusian capital flaunts an array of UNESCO World Heritage Sites, it’s the deep-rooted musical traditions that locals hold closest to their hearts. In 2006, it was named as the world’s first Creative City of Music.

The charismatic Triana district is considered the spiritual home of the region’s most famous export – flamenco. Originally created as an expression for the city’s gypsy community, this flirtatious and fiery art-form came from humble beginnings before being integrated into Spain’s national identity.

Set out across three forms – toque (guitar), cante (song) and baile (dance) – the melody of punchy guitar tones or soulful lyrics of a cantaor or cantaora are often accompanied by the performance of a flamenco dancer. Usually  wearing a traditional red traje (dress), her intricate dance of hand-clapping, intensive footwork and delicate arm and body movements is a sight to behold.

Where to go for flamenco: A flamenco performance is never far away in its spiritual home. Throughout the day, street performers are scattered across Seville’s streets and at night, you have your pick of the ‘tablaos’.

Casa de la Memoria is all about its marvellous scenery and intimate atmosphere – however, spaces are limited, so you’ll need to book your place at this exclusive spot. Or head to Los Gallos Tablao Flamenco, where its delectable range of tapas dishes and exotic cocktails enhance your night of singing, dancing and guitar. 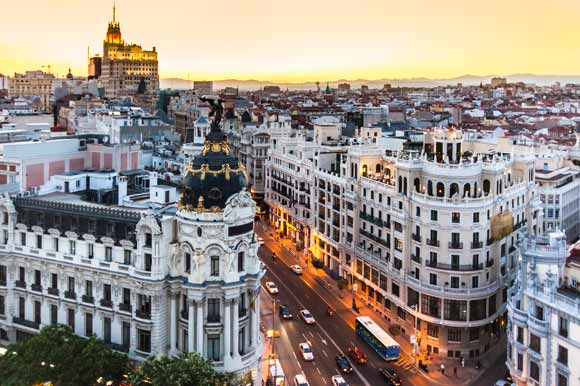 Madrid is a melting pot of musical expertise, thanks in large to long-standing influences from other cultures. Surrounding Spanish states and Iberian neighbours Portugal helped fuel the capital’s scintillating energy, while its mesmeric chotis dance – dating back to the 19th century – came from a more distant source – Czech Republic’s Bohemia region.

Fast forward to the modern day and the city’s music scene continues to flourish with vigorous diversity and raw passion. From the angelic, passionate sounds of Spanish opera to Spanish jazz and its upbeat, funky rhythms – these two celebrated genres highlight the musical talents of melodic Madrid.

Where to go for Spanish opera: This cultural haven is home to one of the world’s most glamorous opera houses – Teatro Real. Set in Plaza de Isabell II, also known as Opera Square, this is Madrid’s premier spot for spell-binding compositions.

Founded in 1818, it has seen leading opera singers from across three centuries perform here. One of its unique traditions includes artists serenading the public from the outside balcony during intermissions.

Where to go for Spanish jazz: You’re never far from a classy jazz joint in Madrid. Hosted in elegant bars and clubs across the city, your sax fix is covered.

If you’re looking to experience the best, then look no further than Café Central – a venue that has played host to some of jazz music’s most prestigious names during its three-decade lifespan. And if you want to see first-hand where it all began, head to Segundo Jazz – the oldest jazz club in the city!

Did you know? Francisco Franco’s rule over Spain from 1939 to 1975 had a profound effect on Spain’s music scene.

The nationalist dictator banned everything linked with regional or foreign cultures. This meant that many artists were forced to stop playing or perform in secret.

There’s also a waterside snack bar where you can grab tasty nibbles and refreshing drinks under the sun, while your air-conditioned room is a great place to escape the midday heat.

Hotel Senator Castellana: Right in Madrid’s heart, you’ll find this convenient hotel. The outdoor swimming pool is perfect for refreshing dips when the city heat is unbearable. From a buffet breakfast to free Wi-Fi and contemporary rooms, it’s a great choice for a Spanish city break.

But if you don’t fancy the walk the rooftop pool is a suntrap. As for your room, expect in-your-face patterns and vibrant paintings. Spain may be best known for the fervid flamenco, but it’s actually the jota’s folkloric tones whose deeper historical roots run deeper.

Unlike its Andalusia counterpart, this Aragon genre (with Celtic influences) has been popular across the country for centuries. Every region from Castile to Murcia provides their own unique take on this 18th century tradition. But there’s no better place to experience it for yourself than the Aragonese capital city of Zaragoza.

It is influenced mainly from Celtic folk music, conventional jota instruments include flutes, tambourines, guitaro (a small guitar) and gaita de boto (bagpipes). And of course, no traditional Spanish jingle is complete without a dance to go with it.

Danced in pairs, in what was thought to be a celebration of fertility – this courtship jig sees dancers hold their hands up high, click castanets and enthusiastically bounce in time to the fast-paced rhythm and theatrical singing.

Where to go for jota: Zaragoza is home to a wealth of jota dance groups. Playing in various venues across the city, and known to dabble in street shows, you’ll be sure to stumble upon a performance.

But for a true taste of tradition, visit during the city’s annual Fiestas del Pilar festival – where you’ll have more jota than you can shake a stick at!

Did you know? The castanet is regarded as the national instrument of Spain, even though they originate from Italy.

Played in two styles, the classical way – where a pair are attached to each thumb – and the folkloric way, which sees them attached to one or more fingers on both hands. 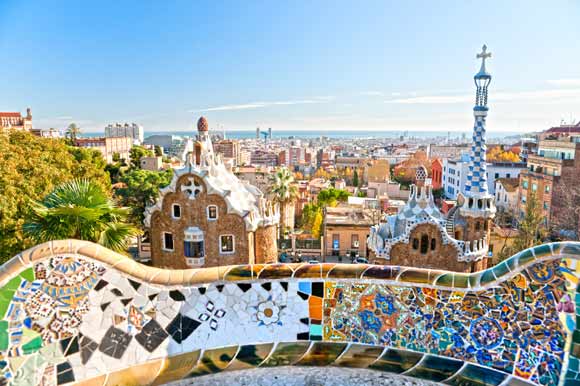 Famous for: Sardana and Catalan rumba

Famed for its innovative architecture and cosmopolitan culture, Barcelona has always been regarded as a bit of a trailblazer. And with a musical heritage spanning over 2000 years, this synonymous trait can be applied to its music too. Across the Middle Ages, Catalan composers were major influences in other European cities still trying to find their sound.

The late 19th century saw the rise in popularity of Catalonia’s famed sardana genre. Accompanied by a cobla band, an 11-piece group playing folk instruments, men and women join in a circle holding hands and perform a routine made up of slow two or three-step movements. This dance symbolises unity and pride of being a Catalan.

Meanwhile, the Catalan rumba is one of the city’s new-found sounds. Born in the 1960s on Barcelona’s vibrant streets, this eclectic fusion of flamenco, cuban music and rock ‘n’ roll, provides a fast tempo and zealous attitude to go with it.

Where to go for sardana: Almost anywhere. Stay in the city and you’ll find a sardana being performed by locals on the streets, particularly during the summer months,

It’s quite a sight seeing strangers, both old and young, coming together to keep this proud tradition alive.

Where to go for Catalan rumba: While Catalan rumba is held in high regard, with plenty of street performances and bar bands on hand, it can be hard to find regular shows advertised.

Palau de la Música Catalana, Barcelona’s prestigious concert hall, plays host to some rumba concerts but you’ll have to keep your eyes peeled to catch one. 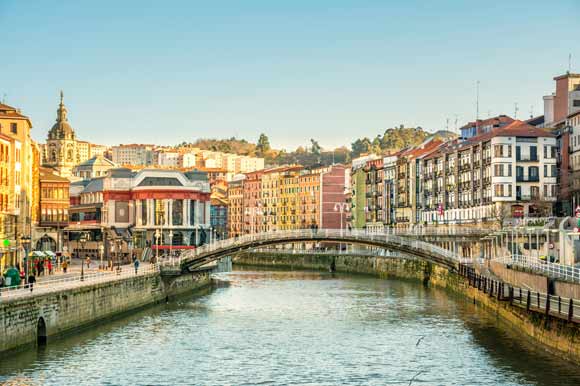 The Basque Country is a rural region set in northern Spain. With strong cultural traditions,  its own flag and even a different language – you’ll not be surprised to learn this autonomous community holds an equally unique musical heritage to boot.

Folk is the most common sound of the region, with its popular variation being trikitixa. A typical act involves two players, with one on the accordion and the other playing a tambourine. Other distinctive Basque instruments include the xirula (three-hole flute), taxistu (three-hole pipe) and alboka (a double clarinet).

Head to its capital city of Bilbao and you’ll get an authentic taste of Basque music. And if it wasn’t clear before, you’ll soon discover how proud the locals are when they start playing their traditional tunes

Where to go for folk: Bilbao is all about its late-night culture, serving up its lively music scene through atmospheric clubs and bars.

Azenka caters for the city’s alternative crowd but has also welcomed many folkloric bands on its stage. Meanwhile, Residence presents a Celtic theme for live folk sessions and Luz Gaz hosts open-mic nights for up-and-coming artists to perform.

Did you know? The late 70s and early 80s saw the surge of punk music in the Basque Country – especially in the southern parts.

Armed with a new attitude and sense of freedom after the fall of Spain’s nationalist regime, this new generation of music lovers oversaw the rise (and fall) of Basque Punk. So, contrary to popular belief – it wasn’t just anarchy in the UK!

Presenting innovation, tradition and passion all rolled into one – the music of Spain is like no other. 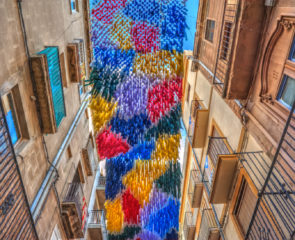 Incredible Things to Do In Spain