The capital of the Netherlands is known as risqué destination famed for its red light district and coffee shops. But, there is far more to visiting Amsterdam, which continues to grow in popularity every year, especially with those looking for a European city break.

From the picturesque canals and lush green parks to the rich history and stunning architecture, here are the best things to do in Amsterdam.

1. Cycle in the Vondelpark 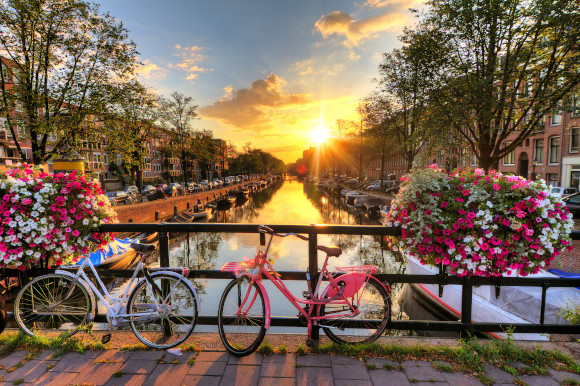 You can’t visit Amsterdam without cycling, it’s known as one of the most bike-friendly cities in the world and is the most popular way to get around. Hire a bike and make your way to the Vondelpark, the largest park in the city. You can either explore at your own pace or join a guided tour to discover its history at the same time. If you’re here in summer, you might even be able to catch a performance at the open-air theatre.

Anne Frank’s house, where she hid with her family for more than two years during World War II, has been converted into a museum. Visit the 17th century canal residents to learn about the persecution of Jews, see the exhibition of Anne’s life and the secret annexe where they stayed.

3. Take a boat down the canals

A large part of the city is covered in waterways and the 17th century Canal Belt is a UNESCO World Heritage Site. So, sit back and relax as you see the sights from the city’s famous waters, via a one-hour cruise, a guided tour or hop-on hop-off boat. There are 165 canals in total, the three main ones are, Herengracht, Keizersgracht and Prinsengracht.

4. See the animals at Artis Zoo 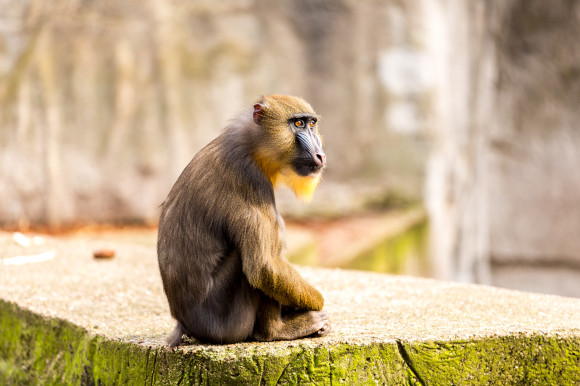 In the heart of the city you’ll find Amsterdam Royal Zoo, one of the oldest in Europe. As you head from the African Savannah to the aquarium you’ll see more than 750 species including elephants and sharks. Once you have come face-to-face with the wildlife, you can also visit the world’s only Micropia museum, which is dedicated to microorganisms and look up at space in the planetarium.

This museum is home to the world’s largest collection of Vincent Van Gogh’s work. Browse more than 200 pieces by the Dutch painter as well as letters and drawings. Don’t miss some of the most famous including Sunflowers, Almond Blossom, The Potato Eaters and The Bedroom.

You can climb the highest tower in Amsterdam between April and October. It soars high above the city and boasts wonderful views. It is part of Westerkerk, the largest church in Amsterdam that dates back to the 1600s. 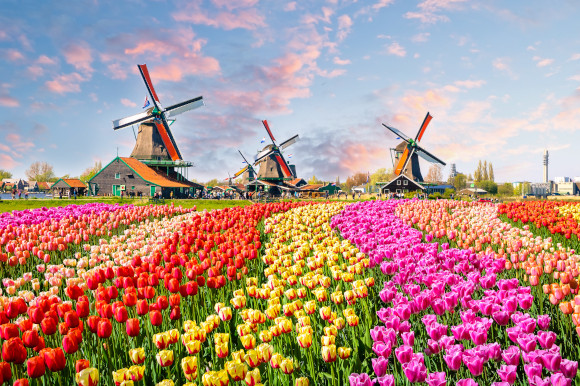 The Netherlands is renowned for its colourful carpets of tulips, an unusual (yet amazing) feat for a city break. There are hundreds across the country, so it’s worth heading a short distance outside of Amsterdam to places such as Zaanse Schans to see them. In the city itself you can experience the tulip festival and see the floating flower market.

‘Over the Edge’ – the highest swing in Europe – is situated on the sky deck at the top of A’dam Toren. Take your seat and dangle 100 metres above the ground as you go over the edge of the tower. Back on the observation deck you can enjoy panoramic views of the city before heading to the rooftop bar for a cocktail or the revolving restaurant for dinner.

This Gothic Renaissance building is among the city’s grandest museums, especially since the €375 million refurbishment it has undergone over the last decade. Head inside to discover Dutch art and history. There are more than 7500 pieces to see including work from Rembrandt.

10. Pick up a souvenir at the Albert Cuyp Markt 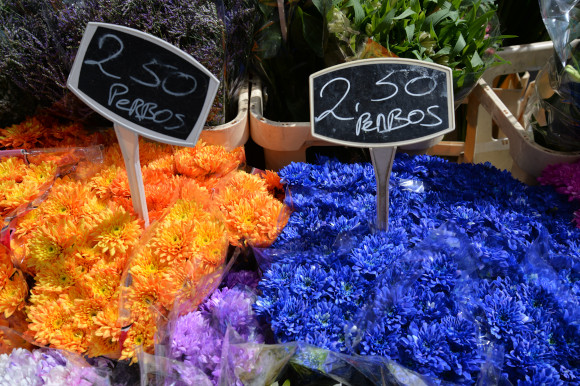 Wander the length of this street to browse more than 260 stalls full of clothing and souvenirs as well as fresh fish, meat and vegetables. Don’t be afraid to barter, the locals love it and you may well get a good deal. Make sure you try a herring at the fish stand – it’s a delicacy here.

‘The Nine Streets’ is in the centre of the canal belt in Jordaan. Here you’ll find a mixture of boutiques and vintage shops, making it the ideal place to head if you’re looking for a little retail therapy.

Take the free ferry to Amsterdam Noord to see the creative corner of this city and the artistic community it is home to. This former shipyard hosts a wide range of events including festivals and exhibitions. While you’re here you can also visit the largest flea market in Europe or grab a bite to eat at one of the city’s most interesting cafes, a large greenhouse that enjoys a waterfront location. 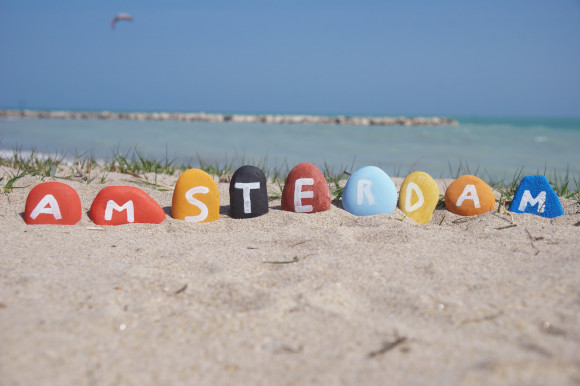 Did you know that Amsterdam has a city beach? You’ll find it situated on the artificial island of Ijburg. This is the ideal place to head on a sunny day to top up your tan, swim in the sea and find a moment of peace away from the hustle and bustle of the centre.

14. Go for a swim at Flevopark

Alternatively, head to Flevopark and you’ll find the city’s only outdoor swimming pool where you can go for a dip after a busy day on your feet sightseeing. The 50-metre pool is surrounded by lush greenery, an oasis of calm on the outskirts of the city.

15. Drink beer in a windmill

Brouwerij ‘t IJ is Amsterdam’s first microbrewery that dates back to 1985. Sample a wide array of beers and ales that are served in small glasses. The beer is delicious but its the location that is the real reason to visit. It’s situated in a working windmill. 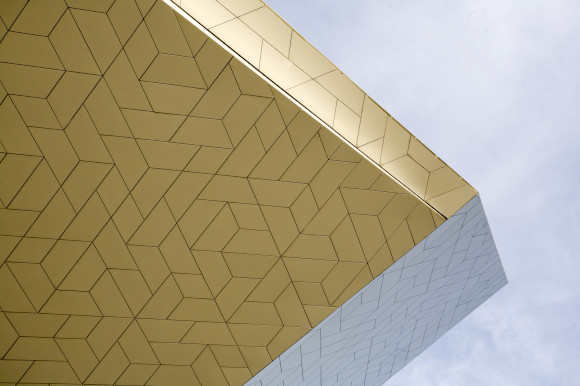 You can’t miss this building due its futuristic shape. But, once you have admired the exterior, head inside to explore the film museum before watching a cult classic at the cinema. Make sure you visit the shop to pick up some memorabilia.

When you’re feeling peckish, head to Foodhallen where you’ll find more than 30 food stalls with a range of tempting treats. Your nose will be filled with all the different food aromas before you treat your taste buds to everything from doughnuts to tacos.

Amsterdam isn’t short of nightlife but this legal squat is the place to head for gigs from emerging musicians to vegan restaurants and studio spaces hired out to artists. 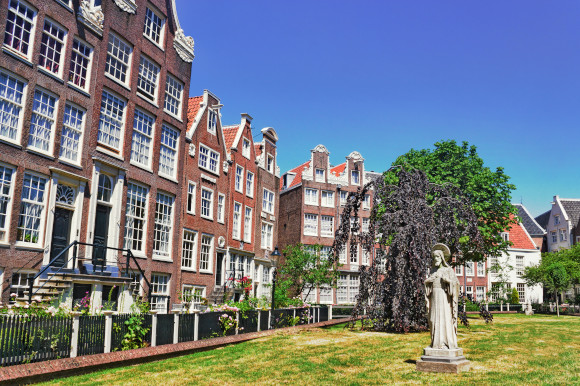 Make your way to Begijnhof where you’ll see the oldest wooden house in the city which dates back to 1425. The houses sit within a courtyard alongside a peaceful garden and were formerly part of a religious community for single women.

20. Brighten up your day at Electric Ladyland

This fluorescent art museum is the first and only of its kind in the world. Visitors become a piece of the art as they take a guided tour of the museum. You’ll find it beneath ‘Electric Lady’ art gallery. Visit between 2pm and 6pm, Wednesday to Saturday but you’ll need to book an appointment.

21. See the art at Stedelijk Museum

This museum is devoted to modern and contemporary art. Across nearly a mile of galleries you can see more than 90,000 pieces of work by some the world’s best artists. See creations by Vermeer and Van Gogh and don’t miss The Night Watch by Rembrandt.

22. Listen to live music at the Concertgebouw 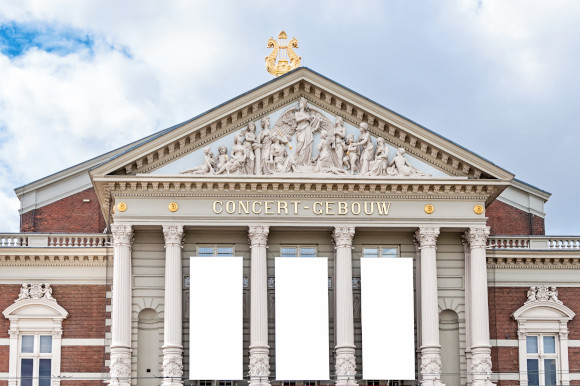 This impressive building hosts regular concerts and has the best acoustics you will ever experience. It opened back in 1888 and has since been through a restoration process. As well as attending a musical performance, you can take a guided tour to learn more about the Concertgebouw and see parts you wouldn’t otherwise have been able to.

23. Bungee jump above the city

Adrenaline junkies can take the elevator opposite the station, more than 50 metres above the city and jump back down towards it as you take in the panoramic view.

Amsterdam has a 24-hour license which means there are some clubs across the city where the party never stops. One of those is RADION, where you can dance for an entire day at a 12-hour rave.

Whether you have visited before but missed some of these activities or have never been and are now keen to explore this popular city, book a trip to Amsterdam and start ticking a few things off the list. Get yourself an I Amsterdam City Card before you travel and you’ll have access to unlimited transport and free entrance to more than 60 museums and attractions, so you can really make the most of your time in the city and see it all.

Have we missed anything? What is your favourite thing to do in Amsterdam? Let us know on Twitter or Facebook. 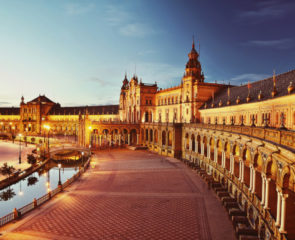 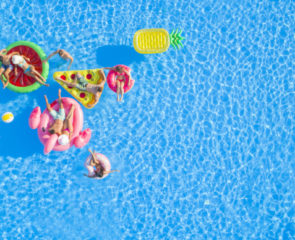 5 Short Flights from the UK for Winter Sun